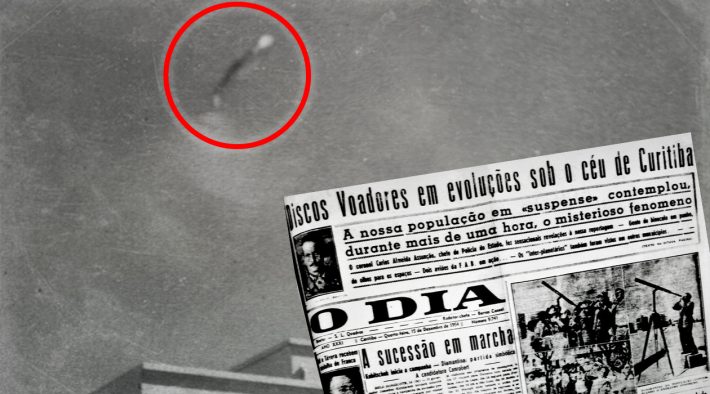 The Curitiba UFO is a mysterious incident that occurred in the early morning hours of October 15, 1986, in the city of Curitiba, Paraná, Brazil. But this was not the only UFO Incident in Curitiba.

What appeared to be a large, triangular-shaped object hovered in the sky for several minutes before suddenly disappearing. Witnesses said they saw bright lights coming from the object, and some said they felt a buzzing sensation in their heads as it hovered overhead.

The Curitiba UFO incident has been investigated by the Brazilian Air Force, as well as some researchers, including UFO researchers.

The event is documented in official documents. A “strange flying object” was seen by several witnesses in the Curitiba area on the night in question, according to a report released by the Brazilian Air Force in 2011.

According to the report, the object was triangular and was seen hovering in the sky for several minutes.

However, the precise nature of the object is unknown, and there is no agreement on what it could have been.

But Where is Curitiba?

Curitiba is the largest city in southern Brazil and the capital of the state of Paraná. It is well-known for its innovative urban planning and public transportation, making it one of the world’s most livable cities.

The city is also well-known for its parks and green spaces, as well as its vibrant cultural scene. Curitiba is a diverse city and a popular tourist destination. It is also a significant economic center, with a thriving commercial and industrial sector.

Curitiba is known as a “smart city” because of its innovative use of technology and commitment to sustainability.

The city government responded by launching a slew of innovative urban planning initiatives, including increased public transportation, green space creation, and investments in public education. This enabled the city to become a more livable and appealing place to live, attracting businesses and investment.

Curitiba had grown into a bustling and vibrant city with a thriving cultural life, a thriving economic sector, and a reputation as a smart city by the early 1990s.

But What is the Curitiba UFO Connection?

Curitiba has large deposits of iron ore, nickel, copper, bauxite, and phosphates that can be found in the state. The region is also rich in gold and diamonds.

Curitiba also has some of the world’s largest uranium and rare earth element deposits, including yttrium and cerium. Curitiba is also rich in oil and natural gas reserves, in addition to these resources.

The city is located in a region of Brazil with numerous rivers and lakes that provide a consistent supply of drinking water. The city also has numerous reservoirs and dams for storing and managing the city’s water supply. Curitiba also has a number of desalination plants, which convert saltwater into fresh water for drinking and other purposes.

There were numerous reported UFO sightings in Curitiba, Brazil, during the 1970s and 1980s. Multiple witnesses reported seeing the sightings, which were reported to have taken place in the sky above the city.

A large, brightly lit object with some lights and strange movements was described in many of the sightings. The sightings went unsolved, and the phenomenon became known as the “Curitiba UFO Wave.”

UFO enthusiasts and skeptics alike continue to debate the origin of the sightings, though most agree that the origin is still unknown.

Possibly the first Curitiba UFO Wave was in the middle of the 1950s.

On December 14, 1954, three shiny metallic disc-shaped planes flew over Curitiba for several hours, even approaching buildings in the city center, frightening the locals. Because of the surprise, stores in the downtown area closed their doors much earlier than usual, right in the middle of the Christmas shopping season.

All of this began around 11 a.m. when three bright spots appeared in the sky over Curitiba. These three objects descended in altitude around noon, as seen from various locations throughout the city.

Around 1 p.m., there were groups of people watching the flying saucers in various parts of the city. Two of these objects drifted south and are no longer visible. The third object descended even lower, approaching some buildings in the center. Fearful shopkeepers closed their doors, and some terrified residents attempted to flee the city’s central district.

The only high-quality photograph of one of the flying saucers seen over Curitiba on December 14, 1954. The Pugsley Building, seen in the image, is located on the corner of Marechal Deodoro St and Monsenhor Celso St in downtown Curitiba.

In 1977 a UFO landed at Bacacheri Air Base, in Curitiba

A UFO landed inside the premises of the Aeronautics School of Specialists (EOEIG), which was headquartered at Bacacheri Air Force Base at the time, in 1977.

Some humanoid figures extracted a Bandeirante plane from the hangar and performed an external visual inspection of the aircraft.

They returned to the UFO and then it hovered for around ten minutes before taking off and disappearing into the night.

The EOEIG was extinguished in 1983 to make way for CINDACTA II.

CINDACTA II is a command and control system for Brazilian air defense. It was developed by the Brazilian Air Force in collaboration with other government agencies and first flew in 1998.

Air defense forces can use the system to track, monitor, and manage air operations in Brazilian airspace, as well as coordinate responses to potential threats.

CINDACTA II is one of the world’s most advanced air defense systems, and it is used to protect Brazil’s airspace from potential threats.

Four CINDACTAs are in operation, each in a different city and responsible for a different region of Brazil’s airspace.

The CINDACTAs were crucial in Operation Saucer (Operação Prato) in 1977, reports of unidentified flying objects over the Amazon rainforest prompted the Brazilian Air Force to launch Operation Saucer. Also in the Official UFO Night in Brazil, where Military airplanes chased UFOs over South and Southeast Brazil.

Another Curitiba UFO flew at a low altitude in the Mercês neighborhood, causing physiological disturbances in the witnesses present.

Cláudia arrived from the College and was ready to leave around 11:30 p.m. on a full-moon night.

On her way to the bus stop at the intersection of Rosa Saporski and Myltho Anselmo da Silva streets in Curitiba, Brazil, she encountered some teenagers who were staring at something in the sky.

She asked what they were looking at and pointed to a bright orange object.

Claudia told them it was possibly a balloon, but one of the boys pointed out that she couldn’t be right because the UFO had already been parked there for some time, which piqued their interest.

She continued to observe him as she walked to a nearby bus stop.

From her vantage point, she noticed that the UAP was above some light strands. The object suddenly moved from right to left, quickly under the light wire, and then back to the same starting point. 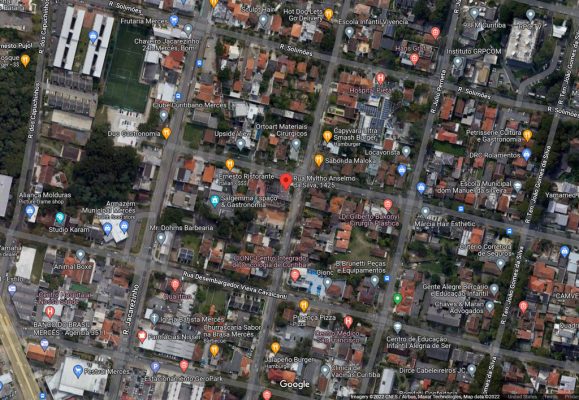 Claudia was about to go to a nearby public phone to warn two of her friends about the observation when she heard one of the boys shout:

The Curitiba UFO is coming down

Claudia immediately called one of the boys and asked him to stay on the phone with her friend so she could take a closer look.

The object approached and passed over their heads, allowing everyone to see it up close and personal.

It reached a height of about 60 meters, according to their calculations.

The UFO was large, round, and surrounded by colored lights that were predominantly blue, red, and yellow. It appeared to be a “neon” light.

The device was lighter in the center (foggy) and had three spikes in front and one in the back, all with lights.

He was taken aback when he noticed the boys running after the object as it moved away toward the Santa Felicidade neighborhood (north).

The phone was ringing nonstop. She yelled at them, telling them it was pointless because they couldn’t reach him.

She could see it moving away at that point, already in the middle of the street, and it was then that she noticed a dome with rows of flashing lights at the top of the object.

It was solid in her opinion. It continued until it vanished over the nearby houses.

He compared its size to that of a house or a truck. She remembered the lights being smoky.

Claudia stated that after the UFO incident, she experienced severe pain in her joints (bones) that lasted at least a week. She also noticed that she had lost at least three pounds during that time.

Carlos Alberto Machado, a UFO researcher, interviewed three of the boys who witnessed the object with Claudia.

Two yellow lights were seen leaving the UAP and then returning, according to Micaeti and Eduardo’s testimonies.

André was on the phone at the time, so he couldn’t see what happened.

Renato, another boy, was very impressed by what he saw. But he refused to be interviewed about the 1989 Claudia UFO Incident.