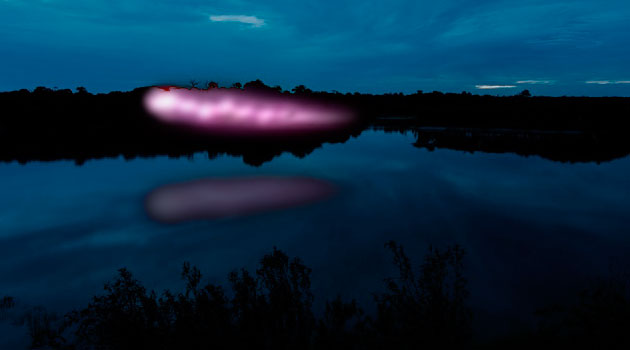 One of the first recorded observations of UFOs in Amazon was in the city of Manaus in 1957, when several people saw in the late afternoon in the Cabral Bridge.

This unidentified flying object caught the attention of the local community and press, which gave wide coverage to the fact.

On the other hand, the presence of the UFOs in Amazon is noticed centuries ago by natives of various indigenous nations, who saw strange beings coming down from heaven.

These encounters become the base for native folklore and also to say the religion when these legends were told by countless generations.

Today these beings and objects observed by the native Brazilians were represented in their rituals and ceremonies.

UFOs in Amazon: The Boithatah

One of the oldest “legend” from the natives in the Brazilian territory would be the M’bai-tatá (in their language) or Boitatá (Portuguese) or Boithatah (English phonetic), which means “fire thing” or “Fire Snake” (following the recent folklore).

This name was first quoted by the Portuguese priest José de Anchieta in a letter dated 1560 to Portugal’s King while his colonization mission of the natives in Brazil.

“There are other ghosts on the beach, living most of the time by the sea and rivers and are called ‘fire thing.’ You do not see anything other than a sparkling beam running … It affects Indians and kills them quickly.”

In some cases, extremely strong light emitted by those objects caused physical reactions in the Indians as eye irritation and malaise.

That’s possible that the world “Kills” would mean disappearance, abduction or be extremely ill, facts that witness report to this day after a UFO encounter.

The Boithatah in the native folklore

The legend told by the Brazilian natives comes from centuries and now has different versions.

In the most popular the ball of lights becomes the eyes of a large snake.

During a great flood that took all the known land, the Boithata survived hidden very deep in the darkness of a cave, for a long period of time while waiting for the waters to retrieve, its eyes enlarge and/or multiply.

From that point became the forest’s protector against the humans.

Another source describes a long period without daylight, in that darkness without moon or stars, no wind or sounds from animals in the forest.

After several days of heavy rain, which flooded areas killing most animals.

A large hungry snake woke up and became eating the eyes from the dead animals floating in the water, this light of the eyes was the light of the last day on which the animals saw the sun (souls?).

Each eye that the Boithatah ate made its eyes brighter and/or multiply.

The scientist possible explanations to UFOs in Amazon

As one of the most curious UFOs in Amazon, the Boithatah is described as sparkling beams, orbs or flying bright lights in the fields and forests, or chasing night travelers.

This phenomenon is similar to jack-o’-lantern, friar’s lantern, hinkypunk, will-o’-the-wisp and hobby lantern.

Currently, are some possible scientific explanations for this phenomenon. These “fireballs” that emerged from the earth were nothing but methane deposits that went into combustion.

Others tried to explain as “St. Elmo’s fire”, a weather phenomenon in which luminous plasma is created by a coronal discharge from a sharp or pointed object in a strong electric field in the atmosphere (such as those generated by thunderstorms or created by a volcanic eruption).

Or also some unnamed phenomena very similar to the “Ball Lightning”, which has many reports.

Similar event the other side of the planet

A similar event is called Naga Fireballs. Also known as Mekong lights, and “bung fai paya nak” by the locals, is a phenomenon said to be often seen on the Mekong River at Luang Prabang in Laos.

Glowing reddish balls in different sorts of sizes from smaller sparkles up to the size of basketballs rise from the water up to a couple of hundred meters before disappearing.

The number of fireballs reported varies between tens and thousands per night.

In Australia, the Min Min Lights, floating, fast-moving balls of color that glow in the night sky and stalk people have been described by Early European settlers.

Aboriginal people describe that paranormal activities are Ancestral Creators and of elders protecting the land.

What about a trip to the jungle to investigate the UFOs in Amazon?

Soon we will bring to you new pieces of evidence and everything you need to know about the Brazil Amazon UFO Invasion in 1977 “Operation Dish”.