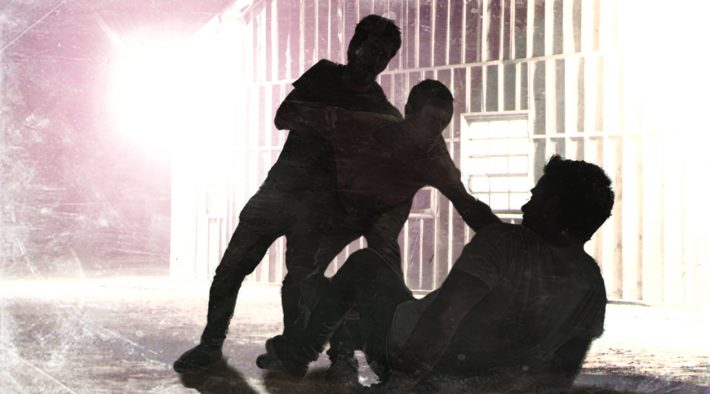 Daildo de Oliveira worked as a security man at one of the São Paulo State Electric Company’s substations in the city of Baurú, from 7:00 pm to 7:00 am the following morning.

From his post, Daildo oversees an area of one and a half to two square km, surrounded by barbed wires at the time. Three buildings are located on the plant, one headquarter, one office, and a workshop, containing wires, transformers, and all sorts of materials needed to maintain and expand the substation.

Around one o’clock in the morning, close to the technical building, about 40 meters from the office, Daildo noticed a man’s figure illuminated by the neighborhood lights behind the office in the ravine.

He crouched down to get a better look, thinking of the easiest way to intercept the invader.

At this point, he noticed another figure near the office dressed in pants and a long-sleeved shirt, both dark.

Outnumbered and unarmed, Daildo entered the workshop and grabbed a 50 cm long tube for electrical installation.

Daildo approached the man by the office, who seemed to be piking by the window.

Without warning, Daildo attacked the invader with a couple of mighty blows, but the man avoided it with quick movements by the stranger, leaving a dent on the wall.

Daildo and the intruder got into a man-on-man confrontation, rolling on the ground.

The man wore a mask covering his face with the same shade as the shirt.

Another one of the strangers joined the fight, almost overpowering Daildo.

According to researchers Daildo de Oliveira, at the time, with 22 years old, 1.60 m, and a robust, compact body.

The two men were almost mobilizing him when a third figured showed up, possibly from the ravine.

This third character had no mask, and Daildo noticed a pale-skinned face with reddish hair. Daildo noticed during the fight that their hair had and harder consistency than ours.

In the heat of the moment, the unmask stranger grabbed and took off Daildo’s rain jacket and hit him in the leg, leaving a pain “when the weather change.”

The three-man threw him on the ground 5-6 times, taking his breath away.

At this point, they pick him up and tap friendly on his back while pronouncing certain words that Daildo did not recognize, but understood as meaning “Go there, you bum, we’ll come back here later.”

From Burglary to UFO Encounter

Cautiously, but looking over his shoulder Daildo went to the Administrative building where another security Antônio should be.

Behind him, Daildo heard the slamming of a “car door.”

When he looked, he saw the shape of an object roughly shaped like a Volkswagen van, but with a base about 10m wide (Tic-Tac anyone?), resting on the ground, and about 15m high.

The vehicle then rose into the air in oblique upward flight. It went to a low-voltage transformer, retreating from there, in another ascent, to pass over the high-voltage network in a new zig-zag moving, leaving towards the neighboring city of Lins (SP).

Only them Daildo realized that the three strangers were not the average thieves.

Daildo, now in the companion of Antonio, inspected the area.

They verified that the gravel was overturned and scattered across the grass.

They found Daildo’s shirt buttons torn off, his raincoat, and a flashlight that had fallen out of his back pocket, which the batteries ran out.

Two of the Workshop windows were open, one most certainly forced.

In the morning, they informed the engineers about the event. They made an inventory of the buildings. According to Dr. Benedito Clovis dos Santos, nothing was missing.

However, signs of hands appeared in one of the files inside the Office Building.

They reported the case to the police and the military authorities paying full attention and seriousness to the event.

There were also 2 military interviews (aircraft), in addition to another with “Reporter Esso” on channel 4 (São Paulo).

After the event, the security changed at the substation, six guards per shift instead of two.

Daildo de Oliveira had Elementary School (fourth grade) and gave statements with complete confidence, not having fallen into any contradiction while interrogated by the Airforce (SIOANI), twice, and in an interview for the TV show “Reporter Esso.”

Major Zani and Private Aragão arrived in the area to investigate the incident on September 19. Major Zani was in charge of a Brazilian Air Force Special Task, the Investigation System for Unidentified Aerial Objects (SIOANI).

They took photos, analyze the area, interviewed witnesses, and made a full report.

During the reconstruction of the episode, they found out that the UFO landed silently 5 meters away from the administrative headquarters of CESP. It was approximately 5 meters high and 3 meters in diameter, in the shape of a Volkswagen van.

It had a light blue color and a bluish glow emanating from the interior.

When taking off, the object emitted a sound similar to that of frying.

At the interrogation, Daildo told Major Zani that one of the invaders was spotted before.

When ordered to leave the premises by Daildo, the man answered, ” I’m waiting on two friends that are hunting armadillos.”

Two days later, the same person came back with the two masked friends.

The Brazilian Society for the Study of Flying Saucers, SBEDV, registered 70 cases in 1968.

Where is the city of Bauru located?

Located in the midwestern region of the state of São Paulo, occupied an area of 667.68 km².

The name, Bauru, may come from “mbai-yuru,” meaning “waterfall” or “river in strong declivity” in Tupi.

The Tupi Language is an extinct language spoken by the indigenous people, primarily those who inhabited coastal regions in South and Southeast Brazil. 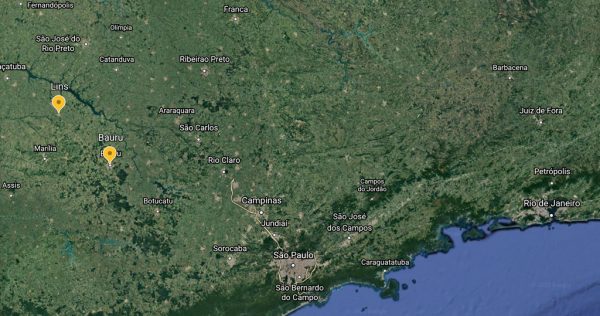 From August to October 1968, SBEDV counted 33 occurrences, of which 13 took place in Lins’ city.

The distance between the cities of Bauru and Lins is just 100 kilometers (62 miles).

Where the aliens had a similar physical appearance to Daildo de Oliveira’s encounter. In only one of these three cases, the visitors were friendly, requesting water.

Further Information about The Lins Incident