Skip to content
Loading...
Strange News
The Ubatuba Incident – A UFO Exploded in 1957 with Fragments?
Alien Abduction in 1956 Niterói
The Bauru Incident – Daildo de Oliveira Wrestling with Invaders
The Turíbio Pereira Incident – Another Closed Encounter in Lins
The Lins Incident – The Maria Cintra Close Encounter of the Fifth Kind
Captain Fortunato UFO Incident – What Were the Foo Fighters?
The Day Aliens Crashed a UFO Conference – The Dolores Barrios Incident
VASP Flight 169 Incident – A Close UFO Encounters of the Third Kind?
The 1846 Leverger Incident – UFO witness from the 19th Century
UFOs in Amazon – When Mythology may be the Answer
DebunkGhostMovies 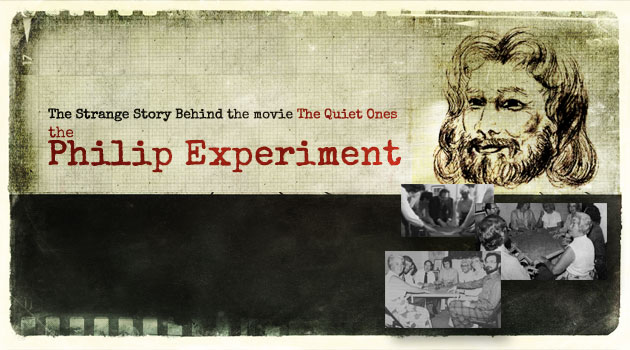 After watching the movie “The Quiet Ones“, on Netflix with my wife, the question came to mind, “is the movie really based on a real experiment, The Philip Experiment?”

A quick research left us with more question than answers.

“The Quiet Ones” is supposedly a film based on the events of the Toronto Society for Psychical Research in the 1970s, where parapsychologists tried to create a ghost to prove they are products of the human mind.

But that’s not what the movie presented.

What is the Movie “The Quiet Ones” About?

According to of the official website, the movie is inspired by true events.

John Pogue directed and wrote the screenplay with Craig Rosenberg and Oren Moverman and was based on a screenplay by Tom de Ville.

An Oxford Professor Joseph Coupland along with a team of university students conducted an “experiment” on Jane Harper, a young girl who harbors unspeakable secrets.

Jane has no memory of her past and she is repeatedly abandoned by foster families, she believes herself possessed by a doll named Evey that gives her telekinetic power.

Keeping her awake in an isolated house, Prof. Coupland intends that she puts her evil energy into an actual doll, thereafter destroying it to heal Jane.

What dark forces they uncover are even terrifying than any of them expected.

Good but was this the story from so called The Philip Experiment?

Watch The Quiet Ones Official Trailer

What is The Philip Experiment?

The group consisted of his wife, an industrial designer, an accountant, a housewife, a student of sociology.

The Canadian parapsychologist group aimed for an experiment that would create a ghost. They wanted to prove their theory that ghosts are products from the human mind.

The experiments (which became known as The Philip Experiment) began in 1972.

The first objective was to create a fictional historical character.

They created “facts” to relate to the life of this character.

They wrote a biography and called him Philip Aylesford.

In his biography, they claimed that he was a seventeenth-century English nobleman, who was married to a beautiful but cold and hostile woman by the named Dorothea.

Philip then met beautiful gypsy by the named Margo, who made him fall instantly in love. Soon Philip and Margo became secret lovers.

Dorothea found out about Margo and accused her of witchcraft. As a result, Margo was burned alive.

Philip plagued with remorse, in the only way he could handle it was to fight in the battle of Diddington, where he died on the battlefield.

With the help from a biography sketch artist that executed freehand drawing of their newly created man, the group move on to the next phase, communication.

The objective that, with Philip’s portrait, the group would easily believe that Philip Aylesford really existed.

The sessions began in September 1972. The group discussed Philip’s life, trying to visualize it with most details as possible.

For a year the sessions presented no result, apart from the occasional presence in the room feeling.

Until the Toronto Society for Psychical Research decided to take a different approach.

They changed the atmosphere to something more close to a tradition séance, dimming the lights while sitting around the table.

They included elements from Philip’s era.

For the surprise part of the group this technique produced the expected result, Philip manifested himself to the group.

The group got their first message from Philip in the form of a very clear beat on the table.

They asked questions in which he could respond with a tap to “Yes” and two to “No.”

Is This Really Philip?

But how could they be sure it was Philip’s ghost answering the questions.

They decided to directly ask for questions from Philip’s biography.

As a result, Philip was able to give accurate information from his history.

The séances continued with a larger range of unexplained phenomena.

Philip began to assume a personality of his own, with strong points of view on various subjects.

Beside the blows on the table, he began to moving the table, sliding from side to side, even over a thick rug.

During Philip’s manifestation, the group took notice of some singular characteristics.

The table would be “electric” to the touch, and the temperature would drop over the table.

It was as if Philip, in a way, became the table itself.

In front of a live audience, about 50 people, Philip made the lights flicker and even made the table levitate just an inch off the floor. All filmed as part of a documentary.

The Philip Experiment ran according to the initial expectations from the Group.

Although, against the main goal, the ghost of Philip never materializes in front of the group.

Even after the long time and strange events documented by the Toronto Society for Psychical Research (TSPR) group the results are inconclusive.

Seems like some concluded that this proved that ghosts do not exist, that they are simply creations of the minds. Others theorized that it may not have been Philip but another Ghost playing with researchers.

Outsiders just believe that all was a hoax.

It was not possible to confirm the events were produced by the ghost of a fictional character by the name Philip.

Is The Movie “The Quiet Ones” Based on The Philip Experiment?

Is there any truth between the film and The Philip Experiment to inspired it?

The connections are too slim.

Aside from the idea of an experiment with paranormal activities the movie produced by Lionsgate and Exclusive Media is a fiction movie inspired but not based on true events.

Besides the fact that the Script was heavily rewritten for budget reasons.

Learn more about other supposedly Based in True Story movies.