Skip to content
Loading...
Strange News
Tiago Machado Incident – Everything You Need to Know About
The 1966 Ufonauts in Quipapa
1970 Avenida Niemeyer UFO Incident – A Strange Splashdown
UFO Lands in Itaperuna in 1971
Was Atlantis Finally Found?
Curitiba UFO Waves – Why So Many for Such longtime?
The 1947 Villa Santina Incident
What No One Tells You About the Alfredo’s Abduction in 1953
Do you know who is Captain Bee?
The Truth About What is the Betz Mystery Sphere?
CryptozoologyDebunk 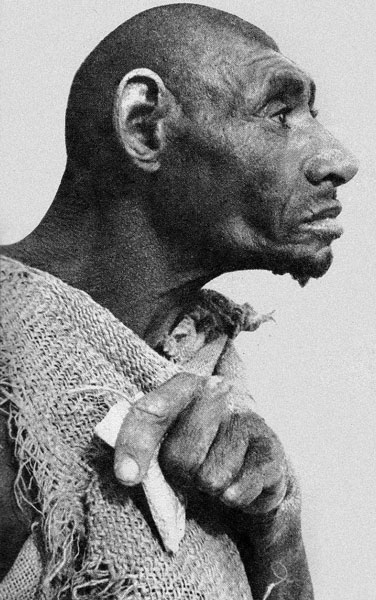 For years scientists searched for the missing link in human evolution, the “link” between humans and their apelike ancestors, according to evolution believers.

Sightings of different types of humanoids received different names and suggestion that they could be the missing link.

However, a physical evidence to corroborate, the theory was never presented.

Names like Bigfoot, Yeti, Sasquatch, Orang Pendek, Mapinguari, among others are given in this sights.

But Azzo Bassou was different, he was discovered in 1931 by the local press in Marrakech in Morocco.

They called him “possibly The Last Living Neanderthal”

Azzo Bassou lived in the valley of Dades, near the town of Skoura.

To city locals, Azzo was not a stranger.

Those who knew him described him with a low intellectual capacity man in primitive ways, since he lived in a cave and only ate raw meat.

His forehead was sunken, had a prominent jaw, a large nose and long arms that reached almost to his knees.

He used to walk naked (they dressed him in a sack, just to take the photographs) and used very rudimentary tools.

Besides being able to articulate some words, many of them were unintelligible.

By 1956, French writer Jean Boullet accompanied by the ethnologist Marcel Homet arrived in town interested to know and study the case.

The sensationalist press took advantage from the material and announced Azzo Bassou as being “the missing link”, displaying his image as the last Neanderthal alive. His physical appearance, tall, thin and the apparent lack of hair, as you can see in the pictures, do not look like the typical robust Neanderthal shown in the science book.

Did They Believe That Azzo Bassou Was the Missing Link? 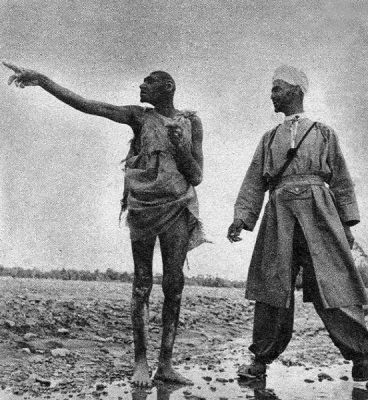 An Italian expedition sought for evidence to prove that Azzo was the missing link.

The village leader, Sidi Fillah, informed them that Azzo died and was buried in his oasis.

According to villagers, Azzo reached 60-years-old when he passed away.

However, the same expedition located two alleged sisters or relatives of Azzo, called Hisa and Herkaia.

Both of them performed heavy work with unusual ease.

Although both physically resembled Azzo, it was not possible to determine if they were really related.

The expedition concluded that Azzo might not be the only one. But rather could be more like him around the area.

Today it is known that the Azzo Bassou’s physical description are clear evidence of microcephaly, a disease that causes the head to be smaller than normal.

Also well known at the time, the physical abilities, uncommon in these cases, presented by Azzo created a large debate between microcephaly or the missing link discovery.

But Azzo Bassou and his relatives would not be the only ones. Three brothers in India presented similarities, but not much is known about them.

Causes of microcephaly include infections, malnutrition, or exposure to toxins.

Symptoms vary and include intellectual disability and speech delay.

In severe cases, there may be seizures and abnormal muscle functionality.