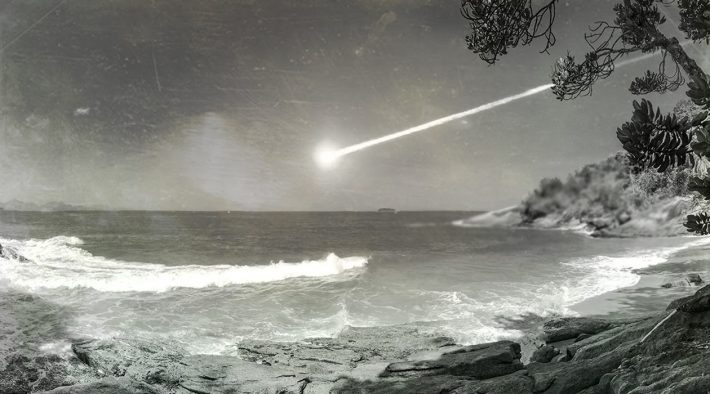 What if I tell you that in 1957 a UFO exploded in mid-air, and we may have some pieces to prove it? The event knows as the Ubatuba Incident.

In 1957, on a remote beach from a small town, witnesses observed an object with extreme speed descending from the skies towards Toninhas beach.

Before crashing into the sea, the object exploded, throwing small parts along the beach and into it.

A large number of pieces were collected by locals, including many knowledgeable fishermen in the region.

The material appeared to be metallic, but light and after analysis found it could not be of this planet.

Located on the northern coast of the state of Sao Paulo, Ubatuba is a Brazilian municipality.

According to historians, the two possibilities for the name Ubatuba, which comes from the local indigenous language, where “ubá” means canoe or “u’ubá,” would be the name of the plant used to make arrows. Joins the rest of the word tyba, which translates to the site.

So Ubatuba’s definition would be “Canoe Set” or “Arrow Supply Site.”

Ubatuba is surrounded by the Serra do Mar and its lush Atlantic Forest.

Around eighty percent of the territory of the city of Ubatuba consists of conservation areas.

The area attracts tourists from the state capital Sao Paulo and from Rio de Janeiro.

In September 1957, in Ubatuba, Sao Paulo, Brazil, many people witnessed an event totally unknown to them.

They watched an object speeding down towards Toninhas beach. About to crash into the sea, the Unidentified Aerial Phenomenon quickly gained height with a fantastic boost and exploded. The explosion has been described as having a white coloration.

The places that fished and enjoyed the beach were surprised by another spectacle of flames and fragments that looked more like fireworks.

These pieces mostly fell over the sea, but many fell near the beach.

Some of the witnesses took courage and gathered some of this material.

According to them, the material of metallic appearance, but very light, looked like paper at the time.

The Ubatuba UFO Incident is featured in the press.

One of the witnesses sent part of the material with a letter to a national newspaper journalist.

Journalist Ibrahim Sued published the letter in full in his column in the newspaper “O Globo” on September 14, 1957.

We received: ‘Dear Mr. Ibrahim Sued. A frequent reader of your column and an admirer, I want to provide you with a real journalistic scoop about flying saucers, if you believe them.

I also didn’t believe what I heard and commented on, until a few days ago, near Ubatuba, fishing with several friends, I saw a flying saucer!

It approached the waters when at a fantastic speed, it rose rapidly. Astonished, we watched this spectacle when we saw the disk explode into flames, falling into thousands of pieces that look like fireworks – even though it was twelve o’clock, or noon – with a brighter glow.

These pieces almost all fell into the sea, but many small pieces fell near the beach, and we collected a good number of this material, so light that it looked like paper.

Here is a small sample of this material, which I don’t know who I should trust to analyze. I never read about a flying saucer been rescued, or pieces of a disk had been collected unless the military authorities did so and used it in confidence. I am sure that this subject will be of great interest to the brilliant columnist, and I am sending him a duplicate for the newspaper and his residence… ‘

But why send it to Ibrahim Sued

From humble beginnings, Sued became the most known columnist in Brazil, fearless of touch in political cases referring to the Rio de Janeiro’s high society.

Naturally, he will be the best choice to spread the news with some credibility.

Even in a Metropole like Rio de Janeiro, it was easy to find the addresses, especially a famous person like Sued.

At that time, anybody phone number could be published in regular phone books. A simple phone call, and you could verify an address.

After Sued published the letter from the Ubatuba Incident, it sparked the curiosity to Olavo Teixeira Fontes, a Brazilian ufo researcher.

The first investigation of the Ubatuba Incident

Olavo Fontes was a physician and former member of the Aerial Phenomena Research Organization (APRO). He believed it to be a natural event and did not think it was a flying saucer.

He contacted the journalist and received the fragments for future study.

Olavo Fontes described the fragments as “three small pieces of a dull gray solid substance. Their surfaces were not smooth and polished, but quite irregular and apparently strongly oxidized. The surfaces of all samples were covered with a whitish material. The thin, dry powder filled the fissures and cracks on the surface of the first sample. ”

On September 24, the elements were analyzed at the Ministry of Agriculture by the Mineral Production Laboratory. 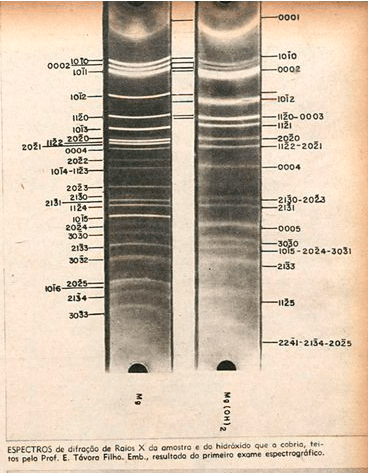 Luisa Maria A. Barbosa, who subjected it to spectroscopic analysis, determined that the fragment’s metal was magnesium. She, therefore, wrote in the report:

“It is high purity magnesium without contamination of any other metallic element. This does not mean that there are no other metals in the sample; they were not accused in this test.

This could occur if the characteristic contamination lines of other metals were hidden by the spectrum’s lines. “

Magnesium is not found free in nature but enters into the composition of more than 60 minerals. 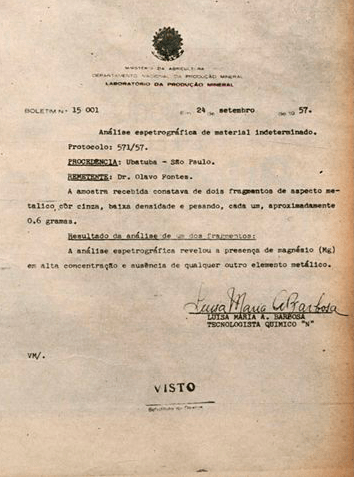 Other tests were performed on the sample that confirmed the purity of magnesium. 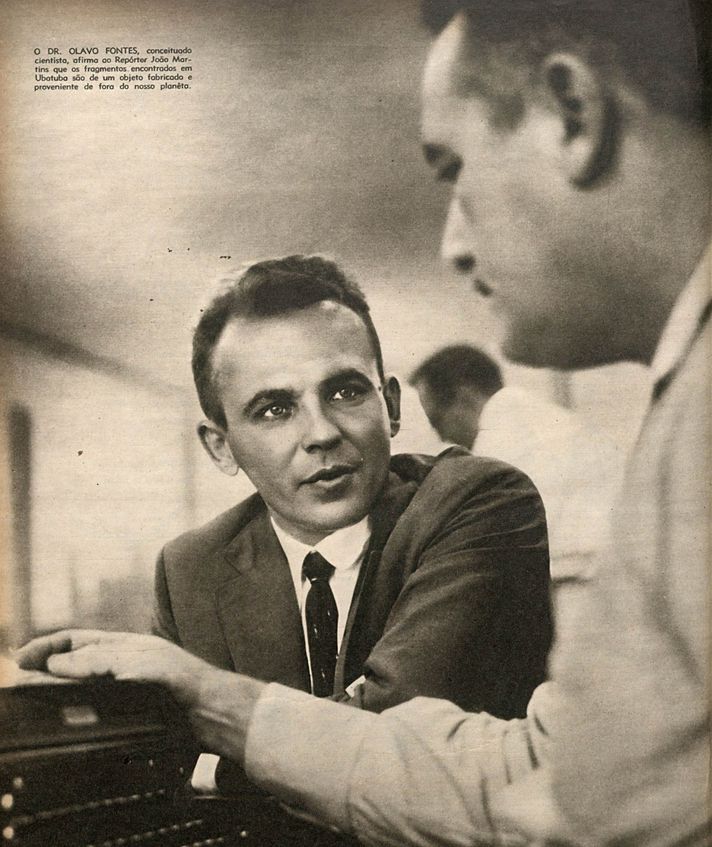 At the Aerial Phenomena Research Organization (APRO). Under Coral Lorenzen’s command, he broke the fragments and sent a part to the US Air Force, but the spectrogram operator said he destroyed the sample without getting data.

APRO then sent it to the US Atomic Energy Commission, which determined the object had a density of 1.7513, slightly higher than ordinary magnesium, with oxygen in the metal.

Other elements were found, but technicians noted the possibility of contamination.

The metal would have been collected from an object that disintegrated at extreme speed with no melting evidence.

By the end of the ’60s, the University of Colorado UFO Project, also known as the Condon Committee, analyzed a sample and defined that it would not be as pure as a first show.

The piece would not be part of a more significant object and would not originate from an artificial metallic object.

There was a high concentration of strontium, which can only be added to magnesium artificially.

“Although the Brazilian fragment has been proven not to be pure, as stated, the material is considered unique. The high concentration of strontium is particularly interesting since the element is not an expected impurity in magnesium, and Dr. Busk knows how no one artificially adds strontium to magnesium.”

Dow Chemical Company had this technology, but how did it get to Brazil?

Thanks to the negative results of the committee, APRO decided to subject the samples to non-destructive analysis.

The results were briefly presented in the organization’s publication, APRO Bulletin.

The analyzes made in Brazil were published in Coral Lorenzen Flying Saucers’ book: The Startling Evidence of the Invasion From Other Space in 1966.

In the comments of the text, Walker and Johnson wrote:

Indirectly it attests that the fragment analyzed by them would be an unidentified object.

The arrival of the military in Ubatuba in 1957

What studies about the Ubatuba Incident have not mentioned so far has been publicly revealed recently by witnesses.

During the days after the Unidentified Aerial Phenomenon explosion at low tide and clear water, fishermen could observe an extended object.

But when they tried to catch it with the help of fishing nets, they found no success.

One morning while preparing their nets for fishing, local fishermen watched a ship approaching the horizon. This ship was from the Brazilian navy.

Sailors got off on boats, went to the beach right at the locals’ homes, and informed them that they could not stay on the beaches or even leave their homes.

Some locals, taken by curiosity, came out through the bushes and watched the military’s actions.

They witnessed two large ships belonging to the Brazilian navy and another unmarked ship.

They could see the removal of a cigar-shaped object placed on the deck of one of the ships.

A new investigation of the 1957 Ubatuba Incident

In May 2016, the researcher Edison Boaventura Jr., President of the Guaruja Ufological Group and Director of Field Research of the Brazilian UFO Research Network, received four metal fragments.

In possession of this material was made new research.

“Mr. Chairman of the UFO Group of Guarujá,

The purpose of this letter is to collaborate with your research anonymously, supplying pieces of metal that belonged to my late father.

From an early age, I remembered that my father told me about the explosion of a disc, in Ubatuba, the coast of São Paulo, showed me small fragments of metal, saying they were from the flying saucer.

As a military officer in the army, he said he had some pieces left, and others were the subject of analysis at the Military Institute of Technology in Rio de Janeiro.

I saw that you made a request by SIC in May 2015 about this event in 1957, so I decided to collaborate by sending attached these fragments.

I want you to help with your research, and I do not want my name and my late father to be involved in this matter, so please respect my anonymity.

Edison Boaventura Jr. took the Ubatuba Incident fragments to the Institute for Technological Research (IPT), initially, a qualitative analysis of the material was made, it was found that there was an enormous concentration of magnesium.

From this result, a quantitative analysis was then made to know the magnesium percentage of the samples.

The result showed a percentage of 99.3% Magnesium, and the remainder (0.7%) composed mostly of Magnesium Oxide supplemented by other impurities.

Next, the researcher intends to make a structural analysis of the fragments.

But what happened to the fragments researched in 1957 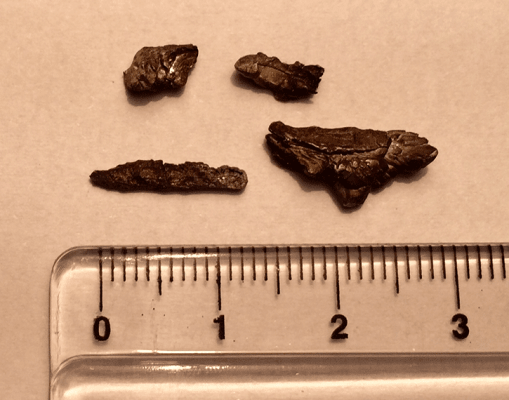 All pieces examined in 1957 underwent destructive analysis, i.e., to know the particles’ composition, they had to be damaged and consequently destroyed.

Only one has been preserved and is at Stanford University under the care of Peter A. Sturrock.

Professor Pierre Kaufman from the FGV did a scientific paper. He concluded: meteorite fragment that would have collided with the earth between 1933 or 1934 or belonged to a UFO.

What are the chances for the 1957 Ubatuba Incident?

Among this UFO incident researchers, several hypotheses were discussed:

What about a Meteorite?

A meteorite has a big difference from terrestrial rocks, it has its own characteristic, like Fusion Crust.

Fusion Crust is a black crust due to the fusion of minerals at the atmosphere’s entrance.

Remimaglitos, are shaken structures, the main characteristic that the cideries have.

And it has high density, magnetism. Meteorites can be ferrous, rocky, and mixed.

Each meteorite has a chemical composition.

The fragments from the Ubatuba Incident carried by Edison Boaventura Jr. did not present these morphological characteristics.

During the fifties, magnesium was one of the ingredients into military explosive devices.

But testimonies make no reference to airplanes or engine noise.

Was The Ubatuba Incident just an Airplane or Satellite Equipment?

The possibility of a plane carrying or being powered by a magnox reactor is among the options.

Magnox is a metal alloy that was created for the construction of nuclear reactors at the time.

No documentation was found showing transportation for the construction of a Nuclear Reactor in Brazil or neighboring countries.

But the composition is very similar.

More information about the 1957 Ubatuba Incident