Skip to content
Loading...
Strange News
The 1947 Villa Santina Incident
What No One Tells You About the Alfredo’s Abduction in 1953
Do you know who is Captain Bee?
The Truth About What is the Betz Mystery Sphere?
What Really Happened in The Benedito Miranda Abduction?
The Day over 10 Thousand people witnesses a UFO – The Morenão UFO Incident
The 18th Century Alien Abduction you didn’t know
The Jose Higgins Abduction Tentative 1947
The Truth About The Janiel’s Abduction
What Really Happened to the family in the Caiana UFO Abduction
CryptozoologyParanormal 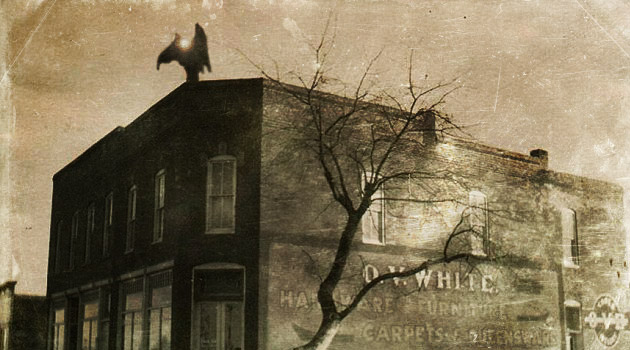 For the next five days, the small town of Van Meter Iowa residents lived in fear of this unknown creature.

Till some a few years ago, the people from Van Meter were unfamiliar with the story that happened just one hundred years ago.

But the local archives are full of a variety of impressive documents to preserve the event from the beginning of the Fall in 1903.

About 1 am, on the first night, U.G. Griffith noticed what appeared a burglar with some sort of light on the rooftop of one of the downtown buildings.

But when he approached, suddenly the burglar jumped to another rooftop across the street, impossible to man to do that, and it disappeared from view.

Again around 1 am, the next day, while sleeping in a room at his office, Dr. Alcott woke up with a bright light shining into his face through a window.

Also, believing to be a victim of a burglary, he grabbed his gun and ran outside, where he encountered the perpetrator.

Outside the town, the doctor witnesses a tall bipedal with bat-like wings.

Dr. Alcott identified the source of the light as coming from a blunt horn in the creature’s forehead.

He opened fire at close range, but the creature not presented signs of effects from ed the doctor’s five shots, so he retreated inside the building for safety. 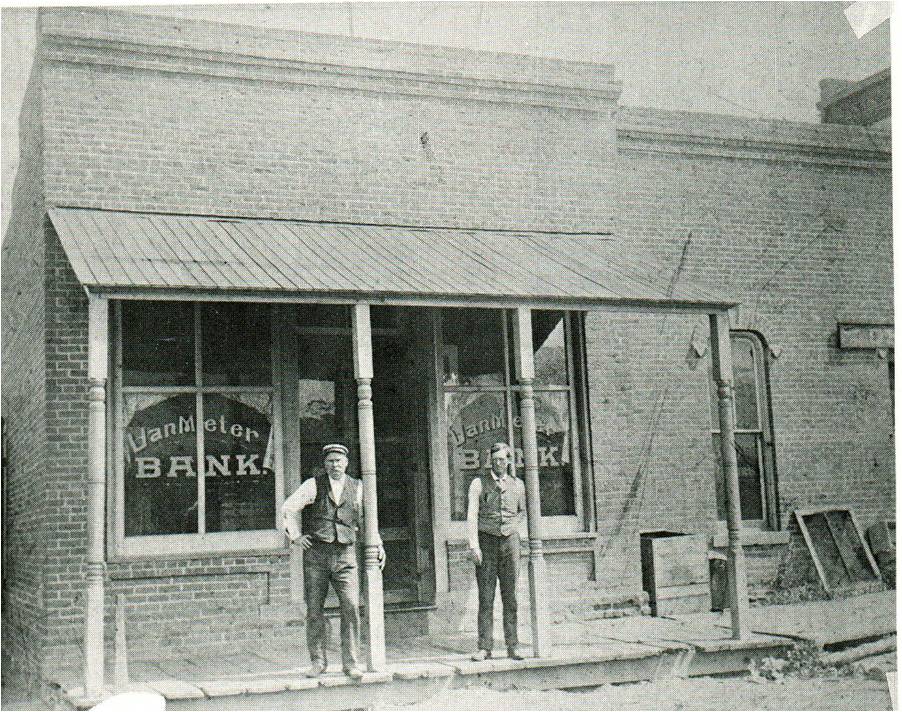 After these two nights, the people from Van Meter knew about the encounters, with many still believing it was always some kind of burglar on a cape.

Clarence Dunn, the local banker, brought along his shotgun to watch over the bank.

One more time, around 1 am, Mr. Dunn was surprised by a powerful blinding beam of light coming through the front window.

It moved side to side as scanning the room till returned the focus on Mr. Dunn.

The banker fired off his shotgun to the body behind the light through the bank’s front window, but the source of the light simply disappeared.

By the morning of that same day, outside the bank, Mr. Dunn found sets of large three-toed footprints and rushed to make plaster casts of them.

Even well documented, these plasters vanished from history. 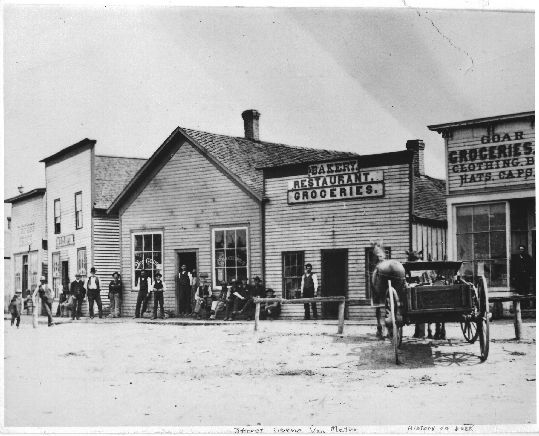 On the same night, Van Meter’s hardware store owner O.V. White woke up with a metallic rasping sound outside his room, located on the 2nd floor of the store.

From the window, Mr. White could witness a creature resting on the crossbeam of a telephone pole during a rainy night.

Mr. White was a well-known marksman in Van Meter, so he aimed and shot the creature.

It didn’t faze the creature, the creature notice White and suddenly, it released an overwhelming smell that knocked the marksman unconscious.

Sidney Gregg, White’s neighbor, woke up with the commotion and witnessed a bizarre creature coming down the telephone pole.

The movements of the creature, while descending the post, resembled a parrot, using its huge beak.

On the Main St., the creature became erect, and according to Mr. Gregg, it was at least eight feet tall.

The creature then took off (some records say it walked and others it flew)  to the old coal mine.

But not before using the light from its forehead as a scanner, as nights before. Sidney Gregg described it as “bright…as an electric headlight.”

The Van Meter Visitor was not alone

Then during the next day, the townsfolk were trying to understand what was going on when that same night, eerie sounds came from the abandoned coal mine.

The mine located at the edge of town, the sound as “though Satan and a regiment of imps were coming forth for a battle” described by the Des Moines Daily News from Oct. 3, 1903.

They saw Visitor, now, accompanied by a second creature, emerging from the mine and taking off into the night.

The mine was about 257 ft deep, so big that it has underground stables for mules.

In that October night, a mob with enough firepower to “have sunk the Spanish fleet” ambush the creatures when it returned to the mine.

Right before dawn, the creatures were welcomed by countless bullets fired in their direction.

One more time, the firearms didn’t appear to have any effect on the creatures, releasing a noxious odor as a defense mechanism and crawling back deep into the mine.

The next day, on October 3rd, 1903, that “a force of men has been set to work to barricade the mouth of the mine,” sealing the creatures inside. 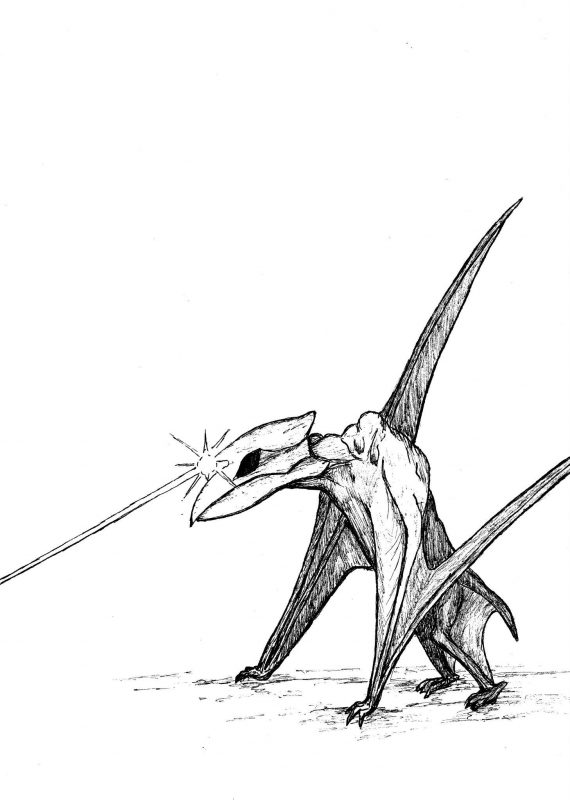 Over one hundred years later, several theories come to try to explain the strange events from those five nights in 1903.

What could it be, an unknown bird, prehistorical survivor, Alien creature, mass hysteria, or a hoax?

The hoax idea does not fit since it is reported by several respected members of the community.

Nobody profit from the situation or the town received any notoriety; there are no historical markers from the incident.

The story only came back to public view after the book “The Van Meter Visitor (A True & Mysterious Encounter with the Unknown)” released 2013 by Chad Lewis, Noah Voss, and Kevin Lee Nelson.

Today some of the locations and buildings still exist, including the remains of the Brick and Tile factory, next to the old mine that holds its share of ghost tales.

The Ioway tribe that once lived in the region where the town of Van Meter sits had tales of humanoid Thunderbirds that would shoot “lightning” from their eyes.

During the years, reports of pterosaur-like animals in the neighboring states of Wisconsin and Missouri.

But if it was a pterosaur, how explain the beam of light?

Bioluminescence could be one of the causes. It is the production and emission of light by a living organism.

But it only found, so far, in marine vertebrates and invertebrates, some fungi, bioluminescent bacteria, and terrestrial invertebrates such as fireflies.

The Van Meter Visitor mixes elements from cryptozoology creatures, body description similar to the Mothman, 60 years before the events in Point Pleasant.

The overpowering putrefactive odor is typical on Bigfoot, Sasquatch, or Skunk-ape sightings.

What it was and how many creatures terrorized for several nights in 1903 the people from Van Meter, Iowa?

Featured on “Lake Monsters in America” from Destination America on October 22, 2016.