Skip to content
Loading...
Strange News
The Ubatuba Incident – A UFO Exploded in 1957 with Fragments?
Alien Abduction in 1956 Niterói
The Bauru Incident – Daildo de Oliveira Wrestling with Invaders
The Turíbio Pereira Incident – Another Closed Encounter in Lins
The Lins Incident – The Maria Cintra Close Encounter of the Fifth Kind
Captain Fortunato UFO Incident – What Were the Foo Fighters?
The Day Aliens Crashed a UFO Conference – The Dolores Barrios Incident
VASP Flight 169 Incident – A Close UFO Encounters of the Third Kind?
The 1846 Leverger Incident – UFO witness from the 19th Century
UFOs in Amazon – When Mythology may be the Answer
Cryptozoology 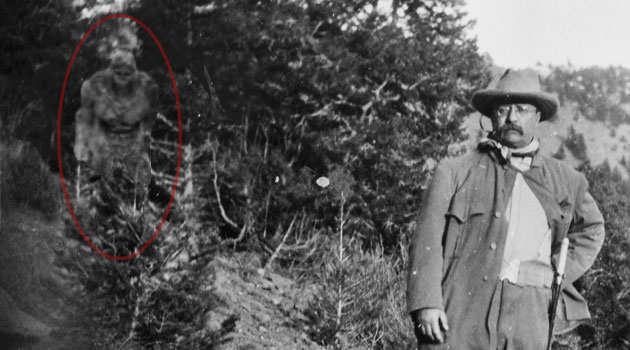 A hunter, named Bauman, told Teddy Roosevelt the story about two travelers on his ranch in North Dakota.

This tale made a huge impression on the president that he wrote about it in his book, “The Wilderness Hunter”, which was published in 1893.

Besides being a storyteller, Bauman, the German-born, was a hunter, trapper, and frontiersman. At a young age, Bauman was trapping with a partner in a very inaccessible area near the Wisdom River between Montana and Idaho.

The game on that location appears to have vanished, it was very unusual.

So the two experienced hunters decided to move going up into a particularly wild and lonely pass through which ran a small stream.

A year early a lonely hunter was killed and half is eaten by what looks like a wild beast, bringing a bad reputation to the local.

They established a base camp, the signs of game were plenty. With one-two hours of daylight left, they left camp to place traps.

When they returned they found the camp disturbed, in their mind, it was an impossibility it was a bear.

They reorganized the camp and Bauman started to make supper.

Tempted by curiosity his partner decided to take a second look at the tracks left in the camp.

“Bauman, that bear has been walking on two legs.”

After dinner, they went to sleep on their bags.

When they started having a strange feeling, seeing shadows, moving around. They could smell a wild-beast odor and glimpse of something moving in the dark.

Bauman reached for his rifle and shot in the dark. He didn’t hit anything. But whatever was there just left, and the night got quiet again.

Even with the forest quiet, the hunters slept very little.

By the morning, the both returned to their business, checking and resetting traps.

As they returned to camp, again it was torn down, the ground covered with footprints. Again they concluded that whatever it was walked off on two legs.

Late at night, across the creek, they could hear the branches crackle as something moved there through the opposite forest.

For several times it produced a harsh guttural long scream long-drawn groan but keep the distance from the camp.

Despite seeing a good deal of game sign they had caught very little fur for the last 36 hours.

On the way leaving the camp, they felt a sense of being followed. Branches breaking behind them and slight rustling noises to one side of them.

Even at daylight, both men couldn’t ignore the fear. Still a couple miles from camp

Bauman volunteered to gather the three beaver traps left to be collect bring them in, while his companion went ahead to camp and made ready the packs.

Took him more time than expected to secure the beavers trapped.

As he arrived at camp and announced his arrival. But received no answer. The German saw the body of his partner lying on the ground.

He rushed towards him to find the body was still warm, but that the neck was broken, while there were four great fang marks in the throat.

A large number of the barefoot footprint of the unknown beast-creature printed deep in the soft campground.

These footprints were larger than the average man, whatever it was, did not eaten the body, but made sure the body was lifeless and had then fled back into the depths of the woods.

Bauman left behind everything but his rifle and struck off at speed down the pass until having the sense of safety and the chance to tell his story.

Teddy Roosevelt encounter with the unknown

Yet, in “The Wilderness Hunter” has another story, but this time lived by Teddy Roosevelt himself, a possible Sasquatch experience.

During a hunting trip in the State of Washington, Roosevelt and a friend hired a Native American to guide them into a remote region.

The guide advised avoiding a particular area. When inquired by the future president he answered for the area being the focus of superstition among the tribe elders tales.

Roosevelt ignored the guides advise and demanded they passed through the “superstition area”.

No signs of a big gain, neither treks was spotted.

The trip would never be remarkable if wasn’t for a Roosevelt note.

During the night while camping there, Roosevelt heard distinct unusual noises.

He could not recognize the sound, neither describe, but even for that experience hunter that noise left on him an alarming feeling.

Teddy Roosevelt, as Bauman did not take the liberty to try to describe nor try to find an explanation for the source of such sounds.

Historian and researchers in other hand speculate different hypothesis, from believed to be extinct creatures to cryptos such as Sasquatch and the Dogman.