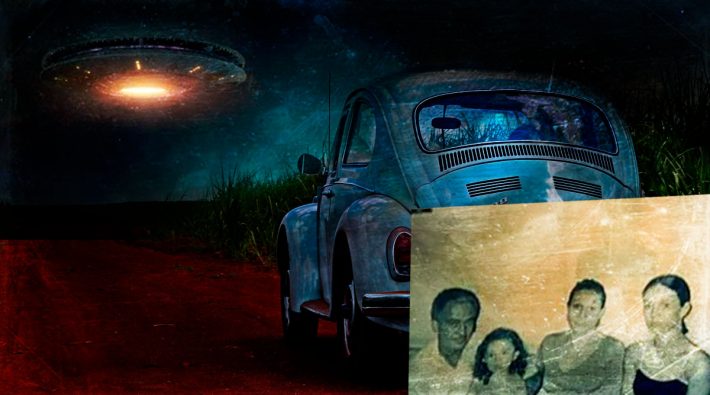 On December 13, 2000, João Joaquim da Silva, know as João Caiana and his family, along with a friend, were driving along a dark and deserted road in Iturama, Minas Gerais.

They used to go to a farm of a couple of friends to collect jabuticaba to make a liqueur. Upon returning home, the daughter of João, Maggie, then 19 years old, saw a bright light on the road, and it was around ten o’clock at night.

At one point, everyone saw strange colored lights in the sky, quite intense, that followed the Beetle 1972, for about 3 km, on the right side of the road.

João looked and said that it was not an airplane but a spaceship.

As the car approached, the light became more intense. João noticed that the object was all lit up, Large, reckoning it should have been about 10 meters wide by six tall.

At that moment, all the witnesses saw the light gray being, thin, with an angular head and no ears, a narrow nose, and large eyes approaching the vehicle.

Then he felt a slight tingle “in the middle of the head,” as he described it, and noticed that his skin was wrinkling all over.

Rosa Caiana found speaking challenging, as her tongue was completely numb, and the girl said she was seeing “one plate on top of another.” With all this going on, the family friend, as terrified as the others, screamed for help. At that moment, Magui fainted before asking them not to let her die.

Soon they noticed a substantial temperature change, and the surprise came that the car was no longer on the road.

He feels pretty cold and has trouble breathing. João just thought of a way to take his family home. 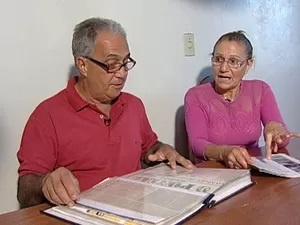 The electrician also claimed to have talked telepathically with the ship’s crew and smelled refrigerator gas in the environment.

One of the crews, who always gave orders to the other two, told Caiana that they were scientists and that he was doing genetic experiments on humans but without harming them.

Caiana told the researchers that several marks were made on her arms, back, and neck, including on her granddaughter.

Caiana UFO Abduction from the child’s point of view

Lavinia was only three years old. With the regression, she remembered some things that would have happened inside the spaceship.

The aliens were about the child’s height, and one of them would have given the girl some dirty water to drink. They put her on the back like a silver merry-go-round and when making the turning movements, the girl vomited.

When Rosa, a teacher, alerted her husband that it looked like they were releasing the family, he feared for the height they were at. The road seemed small and narrow.

Back to the road, the car was placed on the ground. It had the engine running, approximately 300 meters from where they would have been abducted.

Caiana tried to find out more about the extraterrestrials by talking to them, who, apparently, would have accompanied the family’s return to the road. She asked the beings if our God was the same, and the answer was surprising yes.

The telepathic conversation was short-lived but long enough to talk about human diseases, especially AIDS. The aliens stated that the discovery of its cure would take a while to occur but that cancer would have its treatment developed soon.

The family reportedly stayed inside the ship for about an hour, but memories of what happened are very vague.

João believes that whatever happened, it brought physical benefits to the family.

However, in the abduction days, the Caiana family’s car showed severe mechanical and electrical defects. The electrician said that “it wouldn’t start and the battery plates stuck together. I drove all day with a ladder on the hood because I forgot, and it never fell off.”

The unpaved, isolated road was about 7 km from their house.

The electrician went straight to the city’s emergency room, searching for help. Doctor Luiz Carlos Vieira was on duty that night, for about 11 hours.

The family arrived terrified and very thirsty, reporting the encounter with a flying saucer.

According to the doctor, the wife was agitated. The doctor noticed that her hair was standing on end and static electricity all over her body. When checking the traditional tests, pressure, temperature, and pulse all showed the same results, Joao, Rosa, and their daughter.

But a detail caught the doctor’s attention when examining the girl separated. She repeated the same event that an intense light would have captured the family they saw on the road from above.

The family was agitated for several days until the principal of the school where Rosa Caiana worked offered the help of parapsychologist Oswaldo José David, residing in São Paulo, an idea that everyone accepted immediately.

To help uncover more details of this time-lapse, they sought help in hypnotic regression.

During the regression came up surgery on the daughter’s head, a blood collection from the wife’s left leg, and a hole near the spine and in the foot of the granddaughter. To Caiana, a cut was made on the right side of the body and another on the head.

João is the only one in the family who is not afraid of the UFOs and even wants to meet “them” again. While other family members are terrified of the abduction memories.

The Caiana UFO Abduction gained national repercussion, and the family’s life has never been the same since it all happened.

Locals passed by the street cursed the family, threw stones at the house, and even left notes cursing the family members. The population did not believe that the Caiana family had been abducted by extraterrestrials in the small town of Iturama, which is about 240 km from Uberlândia.

The Villas-Boas Abduction is marked forever in history as one of the most extraordinary of all times.

The event took place in 1957 on a farm near the city of São Francisco de Sales. The town is located in the south of the state and very close to the town of Iturama.