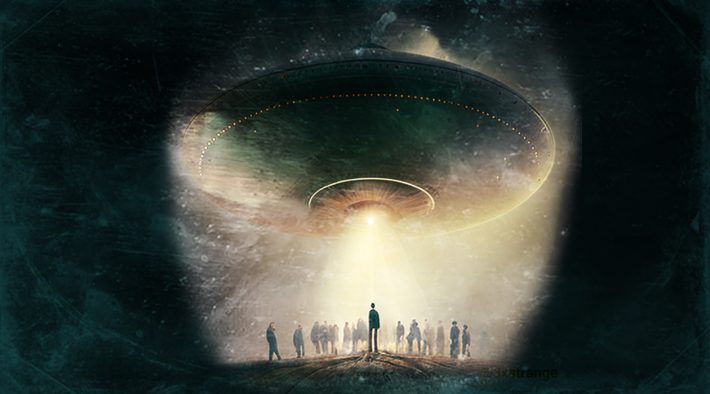 On the evening of February 25, 1966, the Sisters Maria Marluce and Maria Marilucy da Silva, aged 20 and 17, respectively, accompanied by their friend Ofélia Versoa, returned to their home near the Agua Branca Power Plant in Quipapa, State of Pernambuco, Northeast of Brazil.

Instead of taking the road, they chose to walk along the railroad tracks, which were privately owned by the mill and ran next to the Silva family home.

They were walking happily and carefree when, shortly after 10 pm, they noticed a focus of light on the road that runs alongside the tracks, about 100 meters away, that they mistook for a broken-down jeep.

They got within 50 meters of the light and realized it was coming from a strange object in the shape of an upturned dish, 3 to 4 meters in diameter and only 1.50 meters high.

It was suspended in the air, about 30 centimeters from the ground.

To the side, on the floor, a tall man, maybe over 2 meters. He was standing still, immobile, and, also next to the apparatus, several people, these very small, 1.50 m tall, if that much, gesticulating, moving their heads as if they were in an animated conversation, but no sound could be heard, no voice.

From shoulder to shoulder, at chest height, extended an extremely luminous band, whose color varied between light yellow, green and blue.

This last color perished in the light of an electric arc. On the head, a kind of wide, strange, shiny hat, whose luminosity, identical in color to the band on the chest, varied in intensity.

On the tall man, it shone so brightly that it lit up the surroundings.

Panic Terrified, Marilucy and Ofélia ran back, stopping farther away.

Marluce, on the contrary, although scared, approached a few meters encouraging the companions to pass altogether.

Then, coming from the opposite side, a Jeep appeared on the road and the girls took the opportunity to cross the “dangerous” zone.

They crossed with the car and did not see the object anymore.

But they immediately noticed that the device was hidden in a depression in the land, even closer to the railway line through which they would have to pass.

However, the crew could not be seen and, thus, gathering courage, the girls ran past, arriving home out of breath and tired.

Maria Joana da Silva, her mother, upon hearing the story, decided to accompany them back to the place.

It was then that, at the height of the farm gate, they all saw the object in a low flight, 6 meters above the ground.

Screaming, scared, and panicked, they ran back to the house, with the exception of Marluce, who watched the luminous object fly in circles and then, in a few seconds, disappear from sight.

As a result, perhaps, Marluce spent the night extremely nervous, crying for no reason, and feeling a lot of headaches, which did not get better even with the use of medicine.

The next day, the headache went away, but the nervousness continued, although it was less intense.