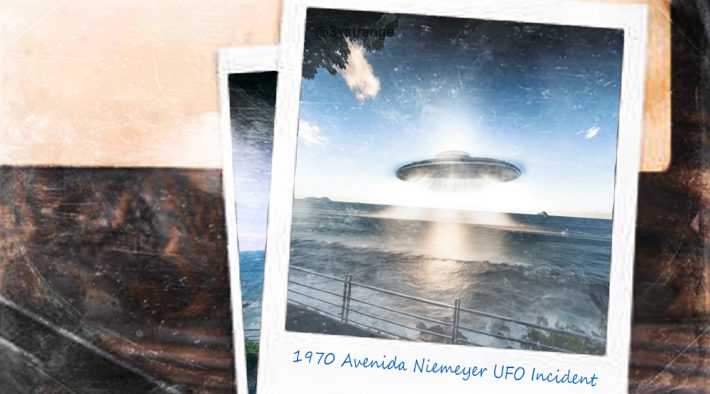 Mr. Aristeu, his wife Maria Nazareth, the couple’s five children, and Federal Police Officer, Joao Aguiar, who was visiting the family, were among those present at house number 318.

The UFO researcher Irene Granchi interviewed the witnesses and reported the following to the SBEOV (Brazilian Society for Studies on Flying Saucers):

He drew the attention of the people on the porch of the house as well as his wife Maria, who was in the kitchen preparing lunch.

She assumed that the vessel might need help, as the “two sailors who were on it were making signs with their hands.

The Federal Police argued that the two people, “in bright clothes and something on their heads” must have been working on the deck of the boat, which was metallic gray in color and must have been 4 to 6 meters (13 to 19 feet) long.

Maria persisted and requested that the police assist the boat and its occupants.

The officer immediately went on foot to the Mar Hotel, where he called the Coast Guard in the city center, who promised to send assistance.

Suddenly the boat soared into the air, arcing upward in a southeasterly direction.

It was only then that they realized it was a flying saucer.

The object had the appearance of shiny aluminum when it was in the water, but in the air, it appeared to be trembling, and Maria Nazareth could see inside the ship, from bottom to top, the two seated crew members.

The UFO vanished from the view of the stunned observers in a matter of seconds.

When the ship took off, it left behind something resembling a “white rim the size of a box,” which sank shortly after and returned to the surface.

Then, a yellow body, elliptical in shape, measuring 40 centimeters, separated from it, leaving part of it immersed. This object is directed slowly to land.

It turned left, at a sharp right angle, when it was 120 meters (400 feet) from the shore, heading towards Sao Conrado beach, on the right.

Maria went out onto the road, following the object for about 10 minutes before giving up.

The white arc, on the other hand, slowly followed the yellow thing, submerging and emerging until it vanished from view.

A peculiar occurrence occurred 20 minutes after the federal police called the Maritime Police.

A speedboat approached at high speed towards the Comprida and Palmas islands, two of the islands of the Cagarras Islands, an uninhabited archipelago located 5 km (3.1 miles) off the shore.

The boat stopped about a thousand meters from the place where the aircraft had just taken off.

Then, all the witnesses saw the speedboat’s crew hoisting a red, cylindrical object on board with great difficulty.

The boat then sped back in the opposite direction it had come from.