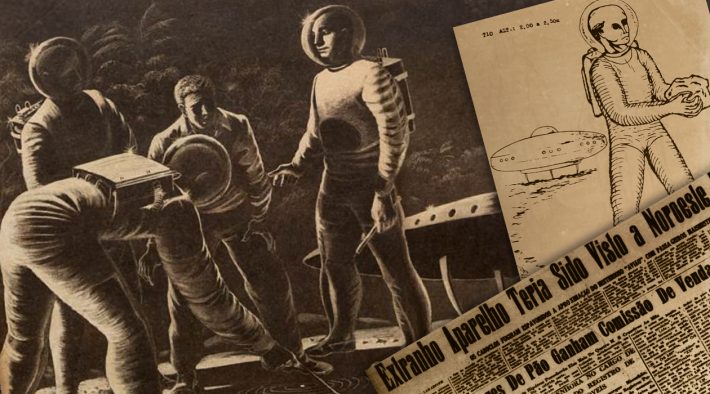 One of the oldest Close Encounters of the Fifth Kind of Brazilian Ufology and one of the first to be recorded in Paraná State, with the topographer Jose Higgins as the protagonist, occurred in 1947.

On July 23, 1947, José Carlos Higgins and some assistants carried out surveying work in a field in Colônia Goio-Bang, close to Campina do Amoral.

At the time, part of the municipality of Pitanga (PR) and today belongs to the city of Luiziana.

The municipality of Luiziana has several rivers and has the most beautiful waterfalls in its entire region. These are distributed throughout the territory, and today the local economy is basically of farmers.

Jose Higgins and his assistants heard a strange high-pitched sound.

They observed a discoidal object approximately 30 meters in diameter, gray-white, which landed nearby.

The UFO rested on curved metal feet. The witness’s helpers fled the scene, terrified. José Higgens, curious, remained there and, even with fear, approached the object to examine it better.

He noticed that in the UFO, there was a kind of window where he witnessed two figures in human form.

Shortly after, a door opened, and two figures came out at 2.10 meters tall. The beings wore transparent overalls that covered their entire bodies, including their heads. The uniform they wore was inflated with air.

On their backs was a metal backpack.

He could see t-shirts, shorts, and sandals underneath the uniform, which looked like glossy paper.

The ufonauts had a strange appearance.

They had large round eyes, round eyebrows, with seemingly ordinary eyelashes.

They were bald, beardless, with large, round heads.

In the object, there was a third being. The aliens were very similar, looking like twins, and they communicated through a beautiful, sonorous language, totally unknown. They moved with agility and lightness.

One of them carried a small metal tube, which he pointed at the witness, indicating that he should enter the UFO. 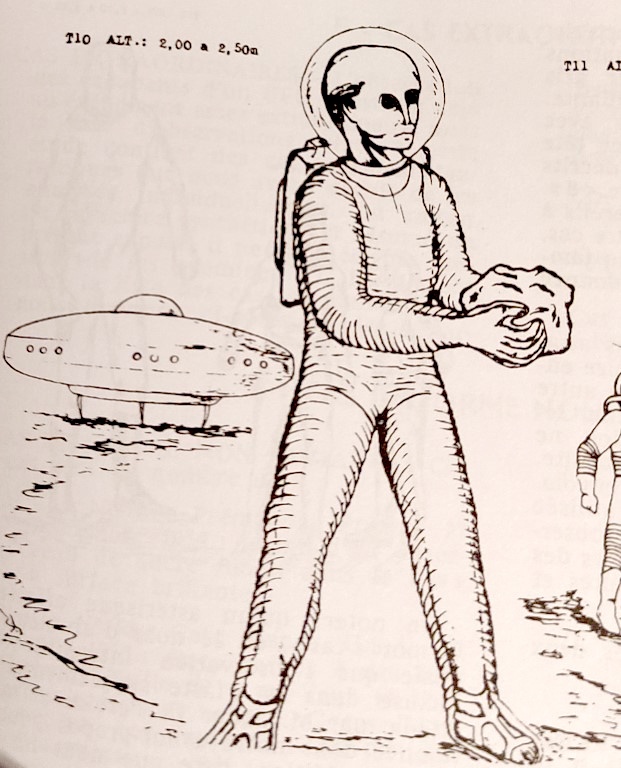 Ufonaut invitation to another planet

One of the beings began drawing on the ground to indicate to Jose Higgins where he would go.

The design consisted of seven concentric circles. The alien pointed to the center point of the drawing, saying: “Alamo.”

Then he pointed to the seventh circle, saying: “Orque”.

Comparing the drawing to the Solar System, we would have a central point as the Sun and the seventh circle as the orbit of the planet Uranus.

The witness took out a photo of his wife, which was in his wallet, saying through gestures that he wanted to pick her up. The aliens agreed. The witness runner away and hid in a bush, from where he began to observe the strange beings.

Sometime later, everyone entered the device that took off, heading north. 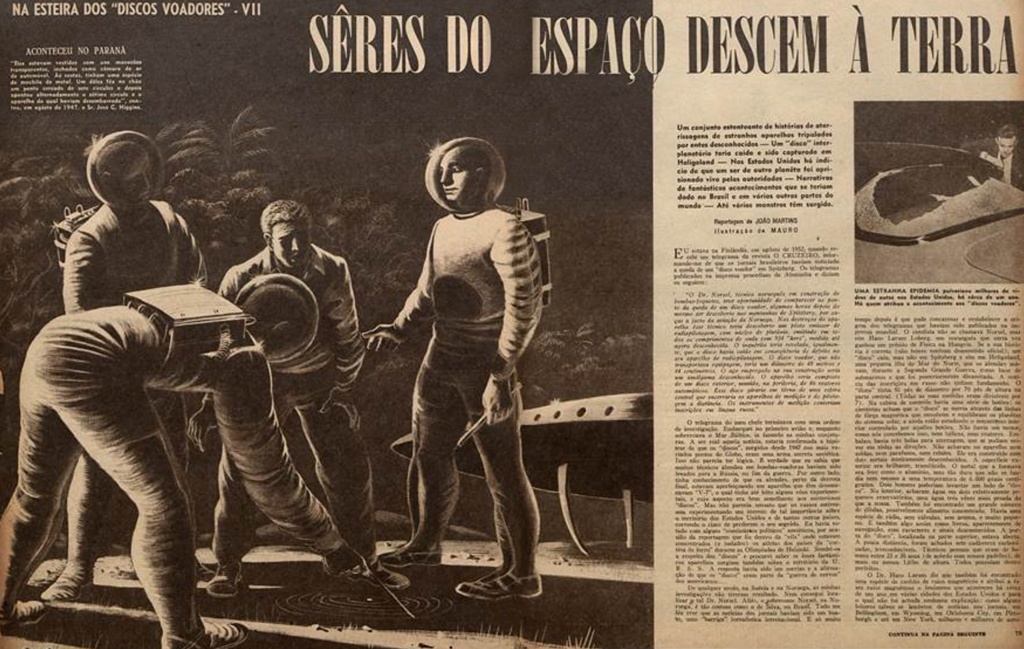 The Incident had repercussions at the time and was reported in some newspapers.

In the Diário da Tarde newspaper of August 8, 1947, we have the following transcript of the testimony of the main witness in the case:

“I was on July 23, west of Colônia Goio-Bang, which is northwest of Pitanga and southeast of Campo Mourão, carrying out some topographic work. When crossing one of the rare open spaces in the region, I heard a deep hiss, however low, made me get up and look at the sky.

Something like a medicine capsule descended from space. My men, all simple workers, fled terrified. And I don’t know why I decided to stay and wait.

The strange device traveled in a closed circle on the ground and landed gently, about 50 meters from me. It was something surprising. It was approximately 30 meters in diameter outside the edges, one meter more or less – and about 5 meters in total height.

The UAP had crossed by tubes in different directions, six of which hissed without smoke.

The part that landed on the ground had curved rods, which bowed slightly more when touching the ground.

The UFO appeared made of a gray-white metal, different from silver.

While I was examining the whole set without daring to touch the device, I noticed a wall showing a window fitted with glass or something similar. I then saw two people examining me with an air of curiosity.

I noticed they were strange-looking. One of the aliens turned to the inside of the UFO to talk to someone.

Immediately, I heard a noise inside the UFO and a door under opened, allowing three people to pass through. Inside a kind of transparent coverall, which completely covered them, head and all, and which was swollen like an inner car tube, filled with compressed air, a metal backpack seemed to be an integral part of the outfit.

Through these overalls, I could see people dressed in T-shirts, shorts, and sandals, not cloth, but shiny paper.

I also noticed that their strange appearance was due to their huge round eyes without eyebrows, having, however, eyelashes, and very pronounced baldness. They had no beard, and their heads were large and round, and their legs were longer than the proportions. They were about a foot taller than I am, six feet tall.

The most exciting thing is that they looked like twin brothers, both in overalls and at the window, behind the glass. One of them had a tube of the same metal as the device in his hand, a small tube, and pointed it at me. I noticed that They spoke to each other. I could hear the words perfectly, and yet I understood nothing.

They spoke a language I had never heard, but beautiful and resonant. Despite their significant bearing, they moved with incredible agility and lightness, forming a triangle around me. The one holding the tube made gestures indicating that I should get into the device.

At that gesture, I approached the door, and I could only see a small cubicle, limited by another interior door, and the end of a pipe came from inside, round, at the base of the ledge or edge.

I began to speak, asking where they wanted to take me with many gestures. They understood the motion, and what seemed to be the chief made around point on the floor surrounded by seven circles.

I had noticed that they avoided being under the Sun.

Showing the Sun in space, he indicated the seventh circle, pointing alternately to this circle and the device. I was dumbfounded. Were they leaving the world alive? It wasn’t me!

I reflected on this. To fight was impossible for me because they were more potent in body and numbers. I then had an idea.

I showed him the picture of my wife, telling them that I wanted to look for her through gestures. They did not stop me. They played like children, jumping and throwing stones of enormous size.

After half an hour or so, after taking a close look at the surroundings, they retired to the apparatus, which rose into the air with the same hiss, heading north, rising until it disappeared into the clouds.

I will never know if they were men or women. However, I can say that, despite the characteristics that I have mentioned, they are beautiful and appear to be in splendid health. On the other hand, it is difficult for me to translate their language into letters.

However, I remember two words: “Alamo” and “Orque,” the one designating the Sun, and this is the seventh circle of the drawing. If I could be sure I would come back, God knows where I would be at this hour!

Had it been a dream? Would it have been reality? Sometimes I doubt that this has happened, as it may well have been a strange but beautiful dream.”

More information about the The Jose Higgins Abduction Tentative 1947