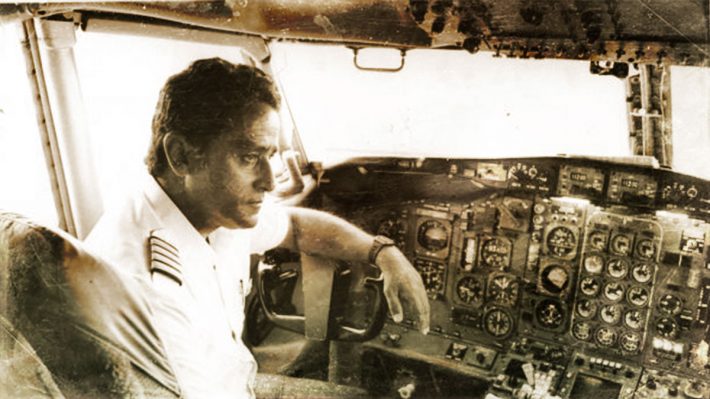 The number of commercial pilots who have sighted UFOs has always been significant, but few have come to the public to explain what they saw. Among those are the VASP Flight 169 Incident.

One of the most documented cases occurred on the night of 7 to 8 February 1982.

Passengers and crews from different planes witnessed the appearance of a luminous object accompanying the aircraft. 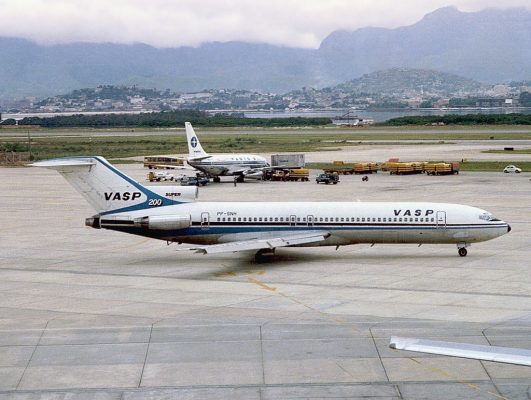 The Boeing 727-200, of the Brazilian air company VASP, Flight 169, flew from Fortaleza to São Paulo with a stop in Rio de Janeiro.

It took off at 2:00 am with good weather throughout the itinerary.

The pilot, Gerson Maciel de Britto, reveals that after an hour of flight, more or less on the city of Petrolina in Pernambuco, he checked the aircraft’s left side for a point of light.

The Commander of VASP Flight 169 thought it was another aircraft with the headlights activated. 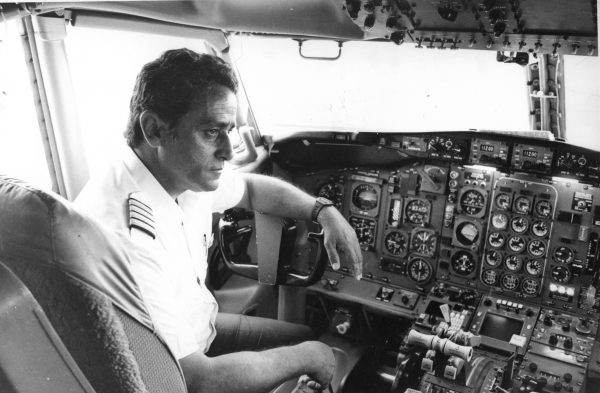 According to their plane’s route, the crew attempted to identify what attitude other aircraft would be since that region is a junction of airways from southern Brazil, Africa, and Europe.

They identified that the point of light maintained an equidistance, did not come in confluence with the route of VASP Flight 169.

Commander Britto also identified the moon and Venus, the brightest star at that moment.

They soon noticed that the object light began to change intensely like a sphere of light spinning, ionizing gases, with the colors reddish, orange and bluish.

Commander Britto got in touch with Recife’s air traffic controller, CINDACTA III, who controls the region.

The air traffic control and other airplane join the UFO Incident.

He asked the CINDACTA controller if he had knowledge of another aircraft in the area.

He asked about the possibility that one of the FAB (Brazilian Air Force) planes would be on a special mission or even training.

But usually, before the takeoff, the traffic control release this type of information.

Recife responded that he was unaware of any military missions and did not know about any other aircraft in Flight 169.

The crew paid more attention to the UFO, with the intense transmutation of colors was proven for them not to be headlights of an airplane.

Commander Britto kept the flight without any change in the route because the UFO, in his view, was not a risk. 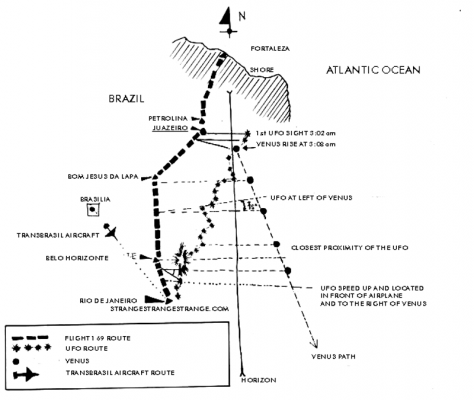 But then the object began to move at an extreme speed.

Flight 169 flew at about 900 km/h, and with the radar on, could check the UFO’s movement next to the aircraft and, moments later, the front of the cabin around 50-60 miles in a matter of seconds.

At times he moved further away, visually diminishing the brightness and returning to the starting point. 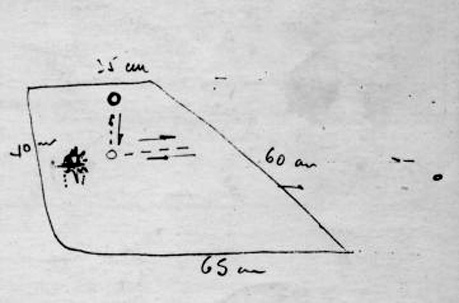 Under the CINDACTA’s control, in Brasilia, the pilot questioned the air traffic in that area. He informed CINDACTA of the UFO he witnessed.

Cindacta reported that they had no point in the scope of detecting something with eco-radar.

The Commander then asked if other aircraft might have been witnessing the same object.

Air traffic control contacted an Aerolíneas Argentinas Jumbo, who reported seeing the object but could not identify it.

A Transbrasil aircraft that traveled from Brasilia to Rio de Janeiro also confirmed the information from flight 169, and that had observed it for some time.

The Transbrasil Pilot, Fernando Guimarães, who received the message, requesting confirmation of the possible speed of the UFO, something close to 906 or 906 km/h.

Moments later, he informed CINDACTA that the UFO was interfering with the aircraft’s sound equipment causing a noise.

Without receiving any command to alter its route by air traffic, the Commander maintained his flight course.

A Close Encounters of the Third Kind with Flight 169?

Near Belo Horizonte, the object that maintained at the same distance began to approach Flight 169.

The crew visually observed the increase in light intensity.

At the same time, the CINDACTA opened communication with Flight 169, informing that it detected an object at 9 o’clock on the left side of the aircraft, confirming what the crew was witnessing.

With the proximity of the UFO, the crew began to identify the profile of a metallic ship.

The object had a discoid shape with a size close to two jumbo jets.

The radar controller did not give any order to lower the flight level or change the flight plan.

The Commander metalized a welcome message, believing the UFO to be the ship from an extraterrestrial civilization.

He summoned the rest of the passengers, almost 150, and crew to accompany the event to the ship’s left.

A very intense fluorescent blue tone light illuminated Flight 169. The passengers observed everything calmly, some including some in the cockpit.

Only two passengers refused to attend the event. Bishop Aloísio Lorscheider and his advisor remained in their accents.

The UFO continued to maintain a distance of 16 nautical miles and Flight 169 until it began the descent procedure.

The object distanced itself to Guanabara Bay’s bottom, on the Rio de Janeiro, and the Commander returned his full attention to the procedure for landing.

However, the rest of the crew continued to monitor the UFO, checking it to be about 6,000 feet.

In three minutes, flight 169 landed at Galeão Airport in the center of Rio de Janeiro. 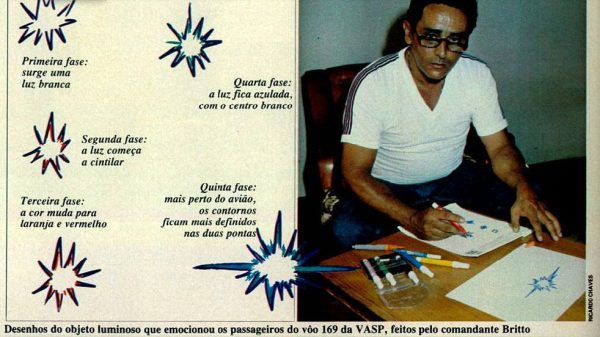 UFO over the legendary Maracanã Stadium

Around 4:40 am on February 8, Mr. Ribeiro, who had insomnia, watch a “large ball of light standing over the Maracanã.”

The time of the observation matches the timeline of the VASP Flight 169 UFO incident. Commander Gerson Britto reported he lost sight of the UFO at 4:35 am while preparing for landing.

The CINDACTA that controls all the air traffic in the Brazilian territory denied any anomaly during the VASP Flight 169.

Unlike what it did five years earlier, it made public that it had detected ten objects on its radars and informed an aircraft in the area that the UFOs were flying at almost 1,600 km/h.

The conclusion to Flight 169 Incident

Scientists, meteorologists, and others have ventured into several possibilities for the phenomenon:

The hypothesis that Flight 169 would have sighted Planet Venus on a day of unusual radiance.

But the astronomer Rogério de Freitas made the exact route of the VASP flight days later at the invitation of a TV station and doubted that a pilot with Commander Britto’s experience could confuse it with Venus.

Researchers have also ruled out the possibility of Solar Flares.

With clear weather, without the presence of clouds for most of the flight, it would be unlikely to Lenticular cloud, let alone Ball Lightning’s formation.

Four years later, on May 19 and 20, 1986, the southeast Brazilian air space accounted for a total of 21 UFOs, literally Unidentified Flying Objects, some of the large scales.

The military officer came forward to the public and told that unknown crafts invaded the Brazilian air space. The event became known as The UFOs Official Night in Brazil.

A month later, another UFO is witnessed by over 20,000 witnesses over a soccer stadium during an official game of the Brazilian National Championship in another state.