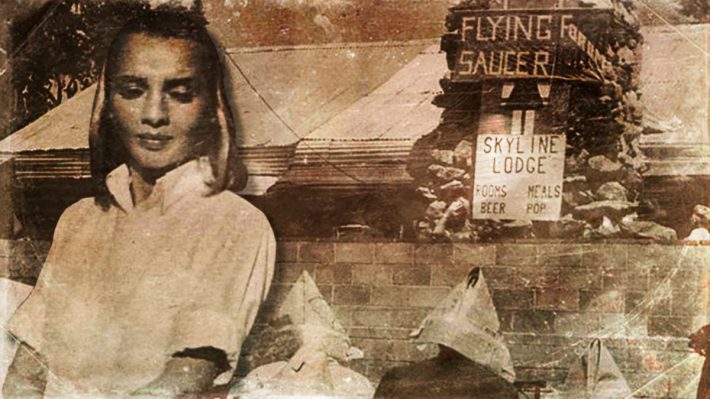 During a UFO Conference, seven years after the Roswell UFO Crash Incident, researchers claimed a group of aliens from Venus arrived to learn what we knew about them.

The audience noticed the presence of a beautiful woman in the company of two men. She had intense eyes, excessive cranial formation, and a strange bone mark on the forehead.

Their features resembled the description presented hours before by one of the Speaker, as the type of aliens that came from Venus and walked among us.

The rumor in the crowd spread that they were “Venusians” in disguise.

Later they found out her name was Dolores Barrios, a fashion designer from New York, and her friends were Donald Morand and Bill Jackmart, musicians living in California. 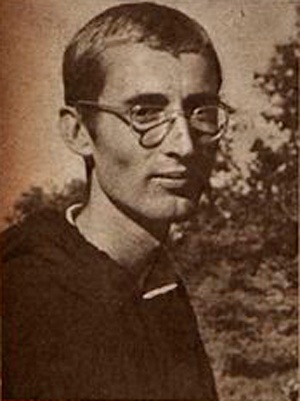 A journalist photographed Dolores using a flash, surprising her. The trio ran to the forest. Soon afterward, a flying saucer took off, but the witness could not capture a photo. 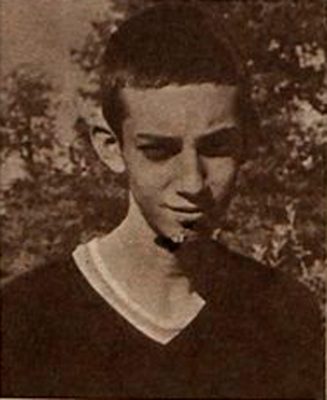 Nobody ever came forward, claiming they knew or recognized the people in the photos.

But are those the facts? Let’s check the original article, the main characters in this major UFO incident, and, most importantly, the era when the event took place.

The UFO Congress in Palomar 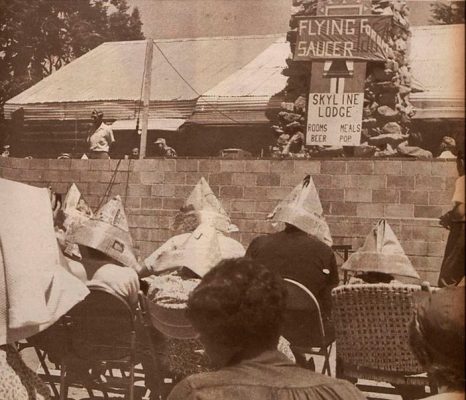 The facts described here happened in the summer of 1954, more precisely between August 7 and August 8.

The main event was the panels with the three contactees, George Adamski, Daniel Fry, e Truman Bethurum about their alien encounters. 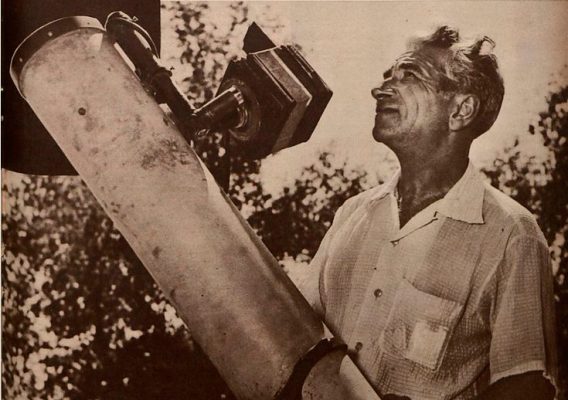 He claimed he met friendly Nordic-like aliens, whom he called “Space Brothers.”

These Space Brothers were from Venus and landed their flying saucer in the Colorado desert by November 20, 1952. In his contact with the Venusians, he had the opportunity to fly in their craft.

They presented him with a concerned message about the future of the people on Earth. The use of nuclear weapons and wars could put life on the planet at risk.

During Adamski’s presentation, he explained the Venusians’ intentions and morphological structure, just like human beings, with various minor aspects.

Their appearance was almost undetected, and they could live among us unnoticed. To illustrate it, Adamski presented a painting of a Venusian he called Orthon.

The image startled the audience. Among the spectators, three of them made this event unique and historical.

By the end of the first day, just a few hours after Adamski’s presentation, the audience noticed the presence of three individuals similar to those described by the contactee.

The rumor started that Venusians were among them, two men and a woman.

The woman was described with peculiar physic characteristics, protruding bone structure in the middle of the forehead, extending to the nasal form, and deep eyes with large eyelashes.

Besides the public’s curiosity in general for flying saucers at the time, only one journalist covering the event made it public to the world.

Joao Martins, a reporter for the Brazilian weekly magazine “O Cruzeiro,” narrated the incident in 3 editions during October of 1954.

“O Cruzeiro,” at the time, was the largest magazine in circulation around South America. 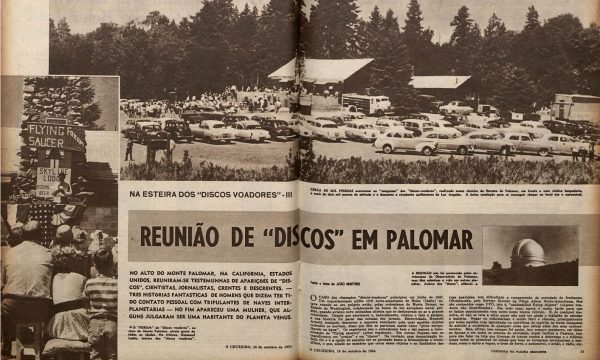 Joao Martins took the opportunity to approach the group and discreetly took some photos.

But in his original article, Martins unpretentiously remarks about the enigmatic woman accompanied by two men who caused a furor while visiting the Congress, and her name was Dolores Barrios.

Who was Dolores Barrios 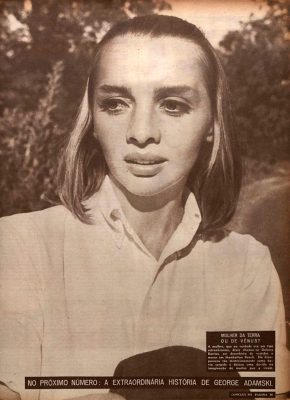 Upon researching, Martins discovered that she signed the guestbook as Dolores Barrios, declaring herself a fashion designer in New York.

The other two men were Donald Morand and Bill Jackmart, musicians from Manhattan Beach, California.

An attendee claimed to had talked to her:
“Are you or are you not Venusians?”.
Dolores Barrios smiled and calmly replied.
“No.”
“- Why are you here?
She answered.
– Because we are interested in this subject.
– Do you believe in flying saucers?
– Yes.
– Is it true that, as Mr. Adamski says, that they come from Venus?
– Yes. They are from Venus.”

Martins asked if he could photograph them, but they refused. They were bothered and tired of being called Venusians.

According to Martins, Dolores Barrios looked very much like the painting that Adamski had shown.

For the rest of the conference, the three became isolated and didn’t talk with the other attendees.

The following day, the strange visitors were more receptive to talk and photographs at the end of the meeting.

On the other hand, Adamski did not like rumors. He thought it was a people trying to discredit him, portraiting themselves as Venusians.

During the fifties, in the middle of the Cold War, the feeling was the possibility of a Nuclear war. The fear of WWIII was real.

In 1951, “The Day the Earth Stood Still” debut in the theaters. The story involves a humanoid alien that comes to Earth to deliver a message that the human race needs to leave in peace or the planet will perish.

It was a similar message delivered by the Venusian Orthon to Adamski.

Throughout the 1950s and 60s, Adamski presented several photos of flying saucers, but some later proved hoaxes.

The most memorable one possibly involved a surgical lamp and that the landing struts were light bulbs. In other photos, Adamski used a streetlight or the top of a chicken brooder. 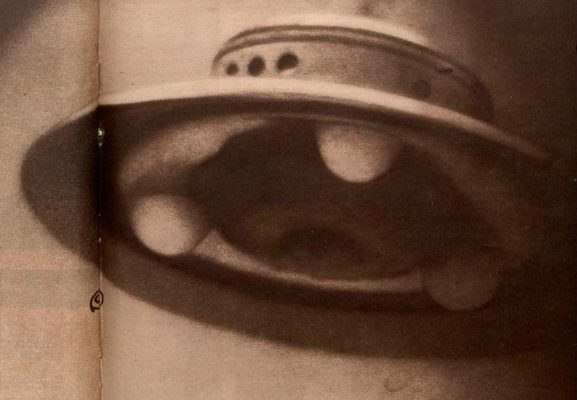 Once, George Adamski announced that he received the invitation to a secret audience with Pope John XXIII and earned a “Golden Medal of Honor” from His “Holiness.”

In Rome, tourists can purchase precisely the same medal with a cheap plastic box.

Controversies behind João Martins and the Media

On May 7, 1952, the reporter João Martins and photographer Ed Keffel were at Quebra-Mar on Rio de Janeiro’s west zone to cover couples seeking a deserted beach date.

After hours of waiting for the opportunity to interview or shoot photos of romantic couples, they claim seen a blue-gray flying object circular appeared before them.

The UFO made evolutions in the sky for about a minute, and Ed Keffel took five photographs.

They rushed to the lab in time to be published in the “Diário da Noite,” a sensationalist tabloid. By the morning, the people could see it on the first page.

The next morning, many militaries came to inspect the photos, including colonel Jack Werley Hughes, who believed the images were authentic from the US Embassy.

Eight days later, the magazine “O Cruzeiro” from the same group releases an extra eight pages with photos from what today is known as the Barra da Tijuca UFO Incident. 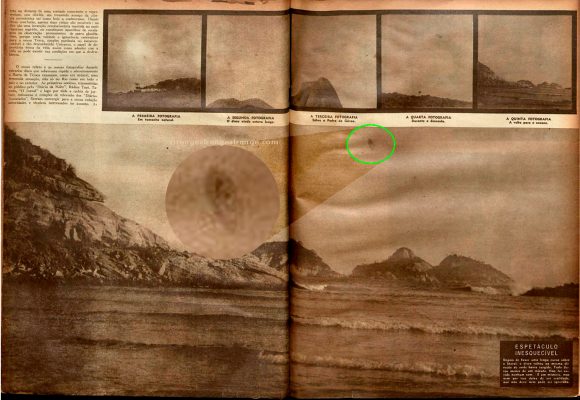 Are The UFO Photos Captured in Barra da Tijuca A Hoax?

But years later, other members from the magazine’s staff came forward to confirm that initially, it should be a joke inside the office. 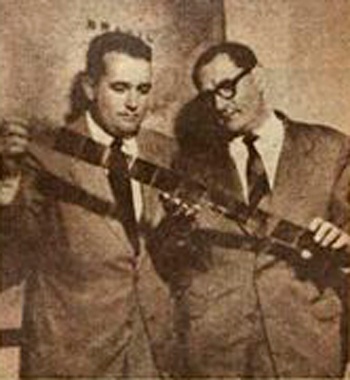 A crowd demanded the release of the “news” by Ed Keffel and Martins’ arrival in the newsroom.

Things got out of hand. They photographed an object in a studio with double exposure.

Leao Gondim de Oliveira, director of the magazine, asked for an analysis of the negatives for Carlos de Melo Éboli, a criminal expert at the Institute of Criminalistics of Guanabara.

The investigation concluded that the shadows of elements on the scene were divergent. In the fourth photo, the environment’s shadow appears from right to left, and the flying saucer from left to right.

The opinion of the Institute of Criminalistics of Guanabara, however, never became public.

The director also declined to accept an offer from Kodak, Rochester, United States, to analyze the negative authenticity.

The magazine sales with the subject “Flying Saucers” were high. Years later, the event in Palomar spread for three issues, in 19 pages total.

According to Antônio Accioly Netto, former director of the magazine, “O Cruzeiro” had the motto: “the truth gets truer when exposed with a reasonable dose of fantasy.”

João Martins and Ed Keffel covered the UFO subject in a large number of articles for “O Cruzeiro”.

Who was Dolores Barrios?

Some researchers affirm that Dolores Barrios was real. An average person, not a Venusian, lived a good life, married, raised a large family, and passed away in 2008.

Another group of UFO researchers still maintains the possibility that the name “Dolores Barrios” belonged to a deceased woman. A common practice used by the mob and cold war spies is to take a new identity at the time.

The true? The truth may lie in a locked drawer or a family that only wants to preserve the memory of their loved ones.

We present you with evidence, and you take your conclusions. What do you think?

phantomsandmonsters.com – “George Adamski and the Venusians”

abovetopsecret.com – “Do you remember Dolores Barrios, the woman from the planet Venus???“