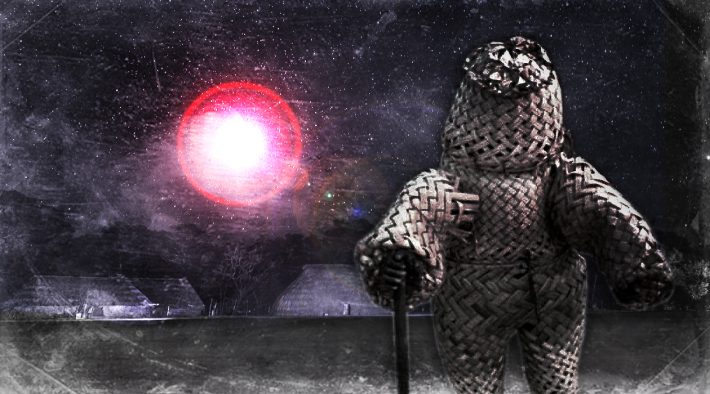 Bep-Kororoti, Celestial Master, a being from the stars, became master of the Kayapó, indigenous people in Brazil.

João Américo Peret recorded for the first time the ritual of Bep-Kororoti, in 1952, almost 10 years before the exhibition of the spacesuits of the first astronauts. A ceremony passed from generation to generation.

The ritual of the Kayapó or Caiapos about Bep-Kororoti tells about a warrior from space.

Bep-Kororoti was worshiped by many tribes in the upper reaches of the Xingu River. The legend tells that this being coming from the sky came out of his “garments” and revealed himself to be fair-skinned, beautiful, and kind.

From the top of the Poukato-Ti hills, there was suddenly a terrible crash in the woods. The indigenous who passed by observed a different being who wore strange clothes that covered him from head to toe. He held a terrible weapon in his hand, the ‘Kop,’ a thunder weapon that sent out a devastating beam that made all the villagers hide in fear inside the forest.

The tribesmen didn’t dare to come out of hiding. They tried to protect the women and children, but some warriors went to fight and tried to shoot down the feared stranger dressed in “bo” – blinding light attire. His spears and arrows were useless as they broke when they hit his strange clothing.

Kayapó tradition tells that this strange, polite, and peaceful white-skinned being named Bep-Kororoti, which can be translated as “came from heaven,” despite all the violent attacks of the indigenous against his intrusion, showed no fury or reaction to the indigenous.

Bep-Kororoti remained in the village among the still frightened natives.

Over time, the indigenous gradually got used to his presence, ceasing the attack and progressively mingling with the invader. Especially since they soon observed that the “new leader” was knowledgeable and “fair.”

Bep-Kororoti taught people how to build houses. He introduced new ways of hunting, which made the tribe consider him a strong and powerful god. He even built a particular place – a school, where he taught children all about life.

Interestingly, the god had a “weapon” for children who did not want to learn what he said. Bep-Kororoti forced them to listen – he could paralyze humans and suppress their will.

As you can see, a very “nice” god, like so many others.

The god Bep-Kororoti was able to kill animals without injuring them, but he never ate their flesh, giving everything to the Kayapó natives. Bep-Kororoti “married” the most beautiful girl in the tribe, and they had many boys and only one girl.

Boys are breeders of a new race and these “sons of God” differed from the other people of the tribe in terms of intelligence and beauty.

But one day, the god Be Kororoti decided to return home.

After years of living peacefully and happily among the indigenous, he suddenly started acting strangely. He put on his “bo” – space clothes and equipment – ​​and announced to everyone that his time on Earth was over and that he should return to his home.
He asked that no one-stop him or follow him when he went up into the mountains. He took his terrible weapon and proceeded to the Poukato-Ti hill from which he arose.

But despite his explicit ban, a group of curious young people followed him secretly and saw when “God sat down in a huge house,” which immediately generated a lot of fire, soon there was terrible thunder, and the house rose and flew into the sky.

All the trees in the area were burned, and all the animals fled. The tribe had nothing to eat, and they were hungry and sad.

Then Bep-Kororoti’s only daughter – Nio-Pout – told her husband that she knew how to find food for the whole village. They went to the mountains where they searched for a “special type of tree” for a long time. When they found her, she entered, and suddenly there was an explosion again, and Nio-Pout flew with “the tree” towards the sky.

Nio-Pout and her husband returned to the village and brought an unprecedented array of food with them. Also, Nio-Pout brought many seeds from different plants and showed them how to plant and care for them. Thus, the indigenous had many new plants, including cassava tubers, which are still the staple food in Brazil.

Bep-Kororoti was immortalized among the Kayapó natives through rituals told and danced for future generations. The “costume” created by the indigenous people is entirely closed. There are no holes for the eyes, mouth, or nose. A stick in his hand symbolizes the ray gun that the god carried with him.

Who is the Kayapó?

The Kayapó live in villages dispersed along the upper reaches of the Iriri, Bacajá, Fresco rivers, and other tributaries of the mighty Xingu River, located in the north of Mato state Grosso, Brazil, in a transition zone between the Cerrado and Amazonian biomes.

The term Kayapó (sometimes spelled “kaiapó” or “caiapó”) was first used in the early 19th century. They do not call themselves by that term, launched by neighboring groups to name them and which means “those who resemble monkeys,” which is probably due to a ritual during which, for many weeks, the Kayapó men, dressed in monkeys masks, they perform short dances.

Even knowing that others call them that way, the Kayapó refer to themselves as mebêngôkre, “the men of the hole/place of water.”

The Kayapó, for whom oratory is a valued social practice, define themselves as those who speak well, beautiful (Kaben mei), as opposed to all groups that do not speak their language.

According to the Kayapó, man is composed of internal bodily elements (blood, bones, organs, flesh, and water) and an external physical component (the skin), a spirit (mekarõ), and vital energy (kadjwýnh) located in the liver.

There is a heavenly world from which humanity comes. The first humans who arrived on Earth came from a long rope, like ants by a log. This was possible because a man saw an armadillo and followed it until it entered a hole, which was later used by people to come into this world.

The celestial plants also descended from the divine world when the daughter of the rain fought with her mother, came down to this world, and was welcomed by a man, to whom she gave the plants.

On the other side of the planet

In 1980, a German researcher Wolfgang Zibenhar found the natives wearing a straw ritual dance costume crowned with a cap similar to a helmet on a trip through Polynesia.

This outfit is similar to the god attire of the Kayapó indigenous in Brazil.

The Polynesians had the same ritual scepter symbolizing the thundering weapon of their deity named Maui. Maui was able to do many interesting and mysterious things. He gave people fire and taught them everything they knew.

This similarity in the costumes and mythology of the peoples who live so far apart may prove that Bep-Kororoti and Maui are the same deities that moved across the sky and taught the natives new technologies.

More information about the Bep-Kororoti