Skip to content
Loading...
Strange News
What happened in the Duas Pontes Incident?
Bep-Kororoti The Celestial Master
The 1998 Capão Redondo UAP Incident
The Ubatuba Incident – A UFO Exploded in 1957 with Fragments?
Alien Abduction in 1956 Niterói
The Bauru Incident – Daildo de Oliveira Wrestling with Invaders
The Turíbio Pereira Incident – Another Closed Encounter in Lins
The Lins Incident – The Maria Cintra Close Encounter of the Fifth Kind
Captain Fortunato UFO Incident – What Were the Foo Fighters?
The Day Aliens Crashed a UFO Conference – The Dolores Barrios Incident
CryptozoologyParanormal 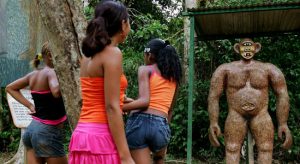 With an about 2,900,000 sq mi (7,500,000 km2), or roughly 40 percent of the South American continent of a dense tropical forest, lives a large number of, yet, unknown creature, among those, is the Mapinguari, resembling a monkey, taller than a man, sharp claws with a strong putrid smell.

There are scattered settlements inland, but most of the population lives in a few larger cities on the banks of the Amazon and other major rivers, such as in Iquitos, Peru, and Manaus and Belém (Brazil).

More than 1,400 species of mammals are found in the Amazon.

The majority of these animals are species of bats and rodents. Its larger mammals include the jaguar, ocelot, capybara, and tapir.

According to natives, the Mapinguari or mapinguary, also know as Isnashi, Caapora, and Jurupari described as resembling either a large ape or giant sloth and with long arms, powerful, sharp claws, reaching heights of 7-8 feet when standing on two legs and is covered with a thick, smelly matted fur.

The origin of the Mapinguari legend is possibly derived from other native amazon histories. The knowledge of the word mapinguari is not known by the first explorers, only when the rubber extractors became cutting the forest and going deep in the region this story has been told.

The knowledge of the word mapinguari is not known by the first explorers, only when the rubber extractors became cutting the forest and going deep in the region this story told.

Some books tell the story of a Manauá Indian cursed by the great snake to become the protector of the forest, transforming him into a monster with an eye on the forehead, a mouth that opens vertical in the belly, and sharp claws.

To overpower enemies a terrible bad smell, what makes no one wants to approach him to end up living alone in the forest.

In another tale, an old shaman or an older age evolves and transform into Mapinguari, cursed and condemned to inhabit the interior of forests with one eye on the forehead, large stature, long hair over the body, and mouth in the navel.

They say he just runs away when he sees a sloth. Strange because from some descriptions considered a prehistoric sloth. Are we talking about two different large creatures?

According to the Indian Parintintin Domingos, the leader of a tribe, it can only be killed with a blow to the head.

But there is a significant risk because the creature has the power to make the victim dizzy and “see the day into night.”

Been dismissed by most of the Brazilian population as a folkloric, mythological creature such as Saci-perere (one leg black kid, who has the power to mess with the land in the form of a twister) or the Iara (a cross between a siren and a mermaid), the persistence of recent reports of sights led scientists to organize expeditions to secluded regions of the Amazon.

In 1937 report from central Brazil claimed a Mapinguari had gone on a three-week rampage, killing over 100 cows and ripping out the tongues from their carcasses.

Thirty years later, hunters in the Badajós Lake, attacked by a creature that they believed to be from the female spice, it had breast similar to a woman but covered by fur.

They shot at the animal as defense, and it screamed high roars that attracted the attention of a possible male.

This other creature was taller, approximately 7 feet tall (2.5m), solid dark fur, resembling a Sasquatch or Yeti, and it came in defense of the female, attacking the hunters who fled in a canoe.

The Mapinguari did not continue the chase turning his attention to helping the wounded female, and both walked away back to the jungle.

In 1995, Joao Batista Azevedo was working by the river when I heard a scream, a horrible scream, suddenly coming from the jungle, something looking like a man, all covered in hair and walking on two legs.

With a 45-days canoe ride from the nearest village, the, now seventy years old, felt great relief when the creature decided not to change them.

About 2010, Geovaldo Karitiana, a member of the Karitiana tribe, while hunting in the jungle near an area that his tribe calls “the cave of the Mapinguari.” He tells the Mapinguari was coming in the direction of the village and was making a big noise.

Close to the witness, it stopped and that when a decaying smell made him dizzy and nauseous and he fainted; when Geovaldo woke up, the Mapinguari was gone.

He calls his father to see the site of the encounter; Lucas Karitiana attested he saw a cleared pathway where the creature had departed, “as if a boulder had rolled through and knocked down all the trees and vines.”

Separating the Mapinguari Folklore from Science

Many cryptozoologists intrigued by reports of this creature, though some have dismissed it as a folkloric/mythological creature, or a long-preserved folk memory of the giant animals that existed in South America in the Pleistocene, possible a giant primate and a giant ground sloth, most likely Megatherium and Mylodon.

The giant ground-sloth theory can explain its supposed bulletproof hide, as preserved ancient skin samples in the late 19th century revealed hard dermal ossicles, small pieces of bone in the skin of dinosaurs and alligators that protected them from predators.

It is possible that such skin would have been impervious to arrows and bullets. Even the scientist is believing this animal is extinct for 13,000 years.

The giant ground sloth, Megatherium, was once one of the largest mammals to walk the earth, more prominent than a modern elephant.

Despite several efforts, searches for verifiable physical evidence have been futile, as the only evidence for the existence of the mapinguari is the description of witness thru the years.

The Amazon is a large area, over ten species of monkeys discovered in the Amazon, and only in 2013, a tribe that never had contact with the civilization located in southeast Amazon, pretty close to civilization, comparing with the extension of the region.

Reality TV Shows in search of the Mapinguari

Joshua Gates, an American television presenter, television producer, and author, and his team, in 2008, experienced unexplained loud crashing noises in the Amazon rainforest while attempting to find and film the mapinguari on the episode of “Destination Truth” entitled “Flying Dinosaur & Sloth Monster.”

National Geographic Channel featured a search for mapinguari on the episode of the “Beast Hunter” entitled “Nightmare of the Amazon.”

Also, the Animal Planet Channel show “Finding Bigfoot” was looking for the allusive beast in his fifth season premiere in 2015.