Skip to content
Loading...
Strange News
What happened in the Duas Pontes Incident?
Bep-Kororoti The Celestial Master
The 1998 Capão Redondo UAP Incident
The Ubatuba Incident – A UFO Exploded in 1957 with Fragments?
Alien Abduction in 1956 Niterói
The Bauru Incident – Daildo de Oliveira Wrestling with Invaders
The Turíbio Pereira Incident – Another Closed Encounter in Lins
The Lins Incident – The Maria Cintra Close Encounter of the Fifth Kind
Captain Fortunato UFO Incident – What Were the Foo Fighters?
The Day Aliens Crashed a UFO Conference – The Dolores Barrios Incident
Cryptozoology 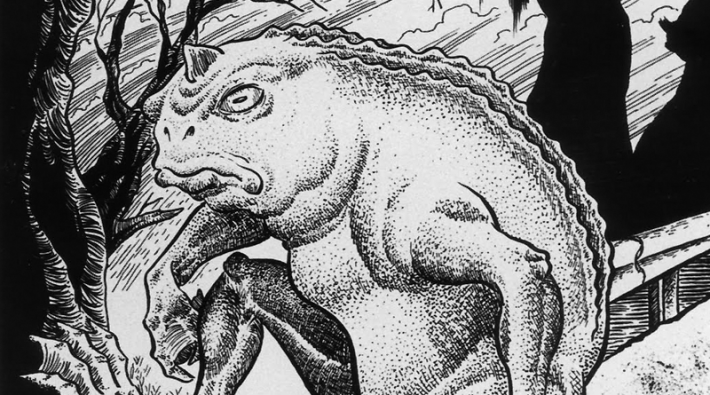 About three and four foot tall, bipedal, humanoid, webbed hands and feet, reptilian skin, and to top it off with  “frog-like” head, this is the description that witnesses give to the Frogmen of Loveland, Ohio.

First Sight of the Frogmen of Loveland

May of 1955, around 3:30 am, by the road that runs along the Little Miami River in Clermont County, just on the outskirts of a small town known as Loveland, Ohio.

In this lonely road, an unnamed witness saw not one but three strange creatures by the side of the road; some reports test he pulled to the curb, others that he was changing the tire (similar to what happened to the first sight of The Lizard Man of Scape Ore Swamp).

This businessman said he watched the 3 to 4-feet tall creatures for about three minutes; they were covered with leathery skin and had webbed hands and feet.

Suddenly one of the frogmen held what the witness he only could describe as a “wand” above its head, and sparks came out of the tip of the stick.

Seventeen years later,  on March 3, 1972, a police officer, Ray Shockey, tells that at about 1:00 am, he was driving slow because of the amount of ice on Riverside Road heading towards Loveland when he saw what looked like a dog by the side of that lonely road.

Suddenly that “dog” decided to cross the road, right in front of the Officer’s car, forcing him to slam on the brakes, and in front of him stood still a bizarre creature.

A frog-like creature, 3 to 4-feet tall, leather skin texture and weighing in the area of 50 to 75 pounds, stood on two legs, look at the police officer, and climbed the guard rail quickly, hurried down the embankment to finally disappear into the Little Miami River.

Another police officer was called by radio to investigate the scene. He testified that he did not encounter a similar creature but confirmed strange scratch marks on the guard rail, where the first officer reported that the frogman crossed on his way to the river.

Two weeks later, also on a cold day, another police officer, Mark Mathews, had another encounter. According to his report, officer Mathews was driving into Loveland when he identified what appeared to be an injured animal lying on the pavement.

Officer Mathews parked and proceeded to remove the body from the road, but the creature jumped to land into a “crouched” position. Following his trained instincts Officer Mathews pulled his gun and open fire.

The Frogman was injured but managed to step over the guardrail while staring at the officer and again disappear in the river. The police officer described the crypto with the same details of the other officer but with a critical shape difference, a tail.

Year past and Officer Mark Mathews deny the details of his encounter, just stating that what he saw as just a large reptile that probably “escaped from its owner.”

Later that year, a local farmer, while inspecting his fields, claimed to have seen four creatures with large and circular eyes,  pale greenish-gray skin, 4 feet tall, and he added that their mouths were wide and filled with sharp teeth.

At that moment, they realized the presence of the farmer. The group of Frogman went into the direction of the river.

Some people kayaking in the Miami River have seen the Frogman on the banks or felt their kayaks/boats violently shaken by a creature.

Even been a disturbing sight for the witness in all encounters, the Loveland FrogMen never tried to harm them, even the use of the “sparkling wand” was just to scare and keep the businessman away.

What do you think, crypto, alien, or a hoax?

According to WCPO, on August 3, 2016, Sam Jacobs and his girlfriend were hunting Pokemon between Loveland Madeira Road and Lake Isabella in Loveland, Ohio, when they spotted a creature in the water.

And more: Officer who shot Frogman of Loveland in 1972 sustained the story is a hoax.