Skip to content
Loading...
Strange News
The Ubatuba Incident – A UFO Exploded in 1957 with Fragments?
Alien Abduction in 1956 Niterói
The Bauru Incident – Daildo de Oliveira Wrestling with Invaders
The Turíbio Pereira Incident – Another Closed Encounter in Lins
The Lins Incident – The Maria Cintra Close Encounter of the Fifth Kind
Captain Fortunato UFO Incident – What Were the Foo Fighters?
The Day Aliens Crashed a UFO Conference – The Dolores Barrios Incident
VASP Flight 169 Incident – A Close UFO Encounters of the Third Kind?
The 1846 Leverger Incident – UFO witness from the 19th Century
UFOs in Amazon – When Mythology may be the Answer
GhostParanormal 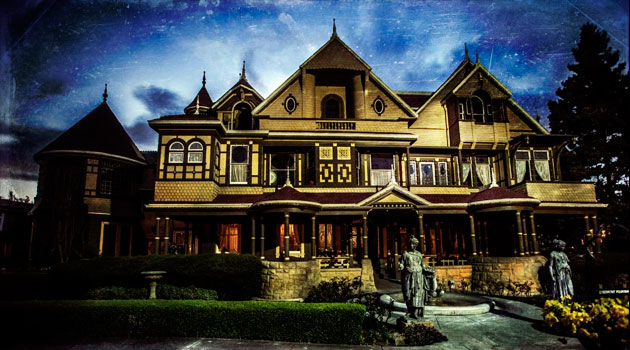 Winchester Mystery House built for 38 years according to ghosts instructions to appease their souls by creating an outstanding mansion for them.

Featured in many Paranormal TV Shows, attraction investigators from around the world, including the famous Harry Houdini the mansion is a mix of elegant and bizarre elements captivating the imagination.

So Who was Sarah Winchester?

Sarah Lockwood Pardee was born in 1840, from Leonard Pardee and Sarah Burns, a carriage manufacturer in New Haven, Connecticut.

She studied at the best private schools of the time, speaking four languages, and praised for her quality at the piano.

In 1862, Sarah’s life changed, when she married William Wirt Winchester.

William was the son of Oliver Fisher Winchester, the Lieutenant Governor of Connecticut and manufacturer of the famous Winchester repeating rifle.

In the 1860s Oliver move his investments to the business that made his mane legendary, buying the Volcanic Repeating Arms Company, by $57,000 when the company went bankrupt.

The company produced guns designed by Horace Smith & Daniel Wesson, that later created another firearm company, the Smith & Wesson when the firm went bankrupt Oliver bought the company out and cleared the debt of $57,000.

Life was good for William and Sarah, but in 1866, their infant daughter, Annie, died from marasmus disease.

On March 1881, William Winchester passed away from tuberculosis.

Sarah Winchester received several million dollars in cash and 777 shares of stock in the Winchester Repeating Arms Company, a fortune today, but even higher over a hundred years ago.

Urging for peace of mind and grieve, Mrs. Winchester seeks help from psychics.

As a result, the mediums informed her that her family recent tragedies were caused by the spirits of American Indians, Civil War soldiers, and others killed by Winchester rifles.

The only way to escape the fury of the ghosts was that Sarah Winchester should move to West and build a mansion in honor of those poor souls.

But to assure her life was not in danger, Mrs. Wincherster could never finish the construction of the house.

Mrs. Winchester left Connecticut to visit a niece, California and there she found the spot that would perfect for building the Winchester Mansion.

For the next 38 years, she was ahead of the construction of a unique project, renowned for its size, its architectural curiosities, and its lack of any master building plan know as the Winchester Mystery House.

Sarah Winchester immediately hired workers in shifts “around the clock.”

The ghosts seem pleased with her.

When Sarah’s mother-in-law died, in 1897, she received more 2,000 shares from the company, and at that time she accumulated just under fifty percent of the capital stock.

With that Sarah Winchester had an income approximately of $1,000 a day. At that time an entire house could be built for under $1,000.

By the beginning of the new century, the initial “house” of eight rooms grown to a fantastic seven-story mansion.

The Winchester’s estate grew to 161 acres of farmland, including orchards of apricots, plum, and walnut trees that also generated income to Sarah’s “project.”

The strange lady from the Winchester Mystery House

Her employees and neighbors loved Mrs. Winchester. She welcomed neighborhood children to play in her garden, inviting them in to eat ice cream or play her piano.

But, Mrs. Winchester conducted the house’s project in a way that it generated rumors and gossip in the local community, which called her a Lady of Mystery.

The tall cypress hedge surrounding the house, planted by the gardeners, only added to the rumors.

Also, stories that the Lady of Mystery covered her face with a dark veil and if a servant happened to get a glimpse of her face by accident, consequently, he or she would be fired.

Mrs. Winchester requested the Winchester Mystery House to be of redwood, but she didn’t appreciate the look, so she ordered it to be stain and applied a faux grain finish.

The mansion accommodates some fantastic features and some strange curiosities.

The end of the Winchester Mystery House construction

With the past of the years, Mrs. Winchester suffered greatly from arthritis.

On September 5, 1922, Sarah Winchester passed away in her sleep from heart failure.

She was laid to rest beside her beloved husband, at the Evergreen Cemetery in New Haven, Connecticut.

With the news of her death, the construction at the Winchester Mystery House stopped, carpenters even left nails half driven into place.

Mrs. Winchester’s personal property, including the furnishings, household goods, pictures, jewelry, and papers were left to her niece, Mrs. Marian Merriman Marriott, according to the will.

The hurry is explained, the mansion and farm were not explicitly mentioned in the will, so it became part of Mrs. Winchester’s estate and were sold by her trustees, the Union Trust Company of San Francisco.

But besides the gossip, other strange events attracted the attention and the curiosity from the neighbors and visitors of the mansion.

A bell ringing at midnight and 2 a.m could be heard by the neighbors, for some, it would indicate the arrival and departure of the ghost that haunted Sarah Winchester.

Consequently, Sarah Winchester never slept in the same bedroom two nights in a row, with the intention to confuse any malevolent spirits that wanted to harm her.

Beside the mirror over the fireplace in the alcove, only the other two mirrors allowed in the entire house.

According to legend, seems like, the sight of the reflection of the ghost could cause them to vanish.

The Most Haunted Room from the Winchester Mystery House

Inside so many rooms that exist in the mansion, at the very center of the house one is unique: The Blue Room.

Since Mrs. Winchester never had a master set of blueprints, seems like it was there where she conducted her private séance to help with her building plans and for protection from vengeful spirits.

Some believe that the blue room is a portal for visitors of another dimension.

Rumors tell she would wear one of 13 distinctive colored robes while there and only people invited by her could be in the room.

Like any old house, the Winchester Mystery House has its cracking noises a collection of events despite explanation and curiosity.

John and Jack Sttubert that worked at the house witness something out of the ordinary.

“I turned, looked down the hall, and saw a man standing there. Then he disappeared and I went down to see if there was anyone in the house, but there was no one there. I’ve never believed in spirits, ghosts or anything like that, but now I believe you do something in this house.” – Jack Sttubert.

During the years from 1973 to 1981, Brent Miller and his wife were caretakers of the mansion.

Mr. Miller reported hearing someone breathe in an empty room. Also one night he could hear footsteps in the bedroom where Mrs. Winchester died.

During one night, he woke up to the sound of a screw being detached, then hitting the floor and bouncing onto a carpet runner. He searched for any evidence but found nothing.

The first renowned paranormal investigator to communicate with the other side at the Winchester Mansion was Harry Houdini, in 1924.

He went for a private midnight tour and séance, but it is unknown if he succeeds in collecting any evidence.

On recently years the Winchester Mystery House featured in a large number of Paranormal TV shows, such as Ghost Adventures, Ghost Hunter and Most Haunted.

The Winchester Mystery House coming to the big screen

The scenes from the film took place out of the actual mansion. Most of its interior needed to be recreated, in Melbourne, Australia, from March 2017 to May 2017.

See for yourself the Winchester Mystery House

Currently, the Winchester Mystery House is open for public visitation.

However, since CBS Films bought the film and photography rights to the Winchester Mansion for this film, tourists aren’t allowed to take any pictures of the interior of the mansion.

That probably will extend to Paranormal Investigations.

While that, the reasons to Mrs. Winchester to build the Winchester Mystery House may never be confirmed, unless you decide to investigate it.