Skip to content
Loading...
Strange News
The Ubatuba Incident – A UFO Exploded in 1957 with Fragments?
Alien Abduction in 1956 Niterói
The Bauru Incident – Daildo de Oliveira Wrestling with Invaders
The Turíbio Pereira Incident – Another Closed Encounter in Lins
The Lins Incident – The Maria Cintra Close Encounter of the Fifth Kind
Captain Fortunato UFO Incident – What Were the Foo Fighters?
The Day Aliens Crashed a UFO Conference – The Dolores Barrios Incident
VASP Flight 169 Incident – A Close UFO Encounters of the Third Kind?
The 1846 Leverger Incident – UFO witness from the 19th Century
UFOs in Amazon – When Mythology may be the Answer
Archeology 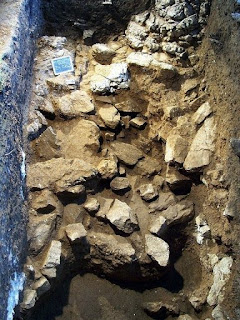 An undated handout photo shows an prehistorical stone wall. Greek experts discovered the oldest stony wall of the country, blocking the entrance of a cavern for 23,000 years in Thessalia, in the north. (Photo: Greek Culture Ministry)

The oldest stone wall in Greece, which has stood at the entrance of a cave in Thessaly for the last 23,000 years, has been discovered by palaeontologists, the ministry of culture said Monday.

The age of the find, determined by an optical dating test, singles it out as “probably one of the oldest in the world”, according to a ministry press release.

“The dating matches the coldest period of the most recent ice age, indicating that the cavern’s paleolithic inhabitants built it to protect themselves from the cold”, said the ministry.

The wall blocked two-thirds of the entrance to the cave, located close to Kalambaka, itself near the popular tourist area and monastic centre of Meteora in central Greece. Greek palaeontologists have been excavating the site for the last 25 years.