Skip to content
Loading...
Strange News
The 1947 Villa Santina Incident
What No One Tells You About the Alfredo’s Abduction in 1953
Do you know who is Captain Bee?
The Truth About What is the Betz Mystery Sphere?
What Really Happened in The Benedito Miranda Abduction?
The Day over 10 Thousand people witnesses a UFO – The Morenão UFO Incident
The 18th Century Alien Abduction you didn’t know
The Jose Higgins Abduction Tentative 1947
The Truth About The Janiel’s Abduction
What Really Happened to the family in the Caiana UFO Abduction
ArcheologyHere is your SignReally?Urban legend 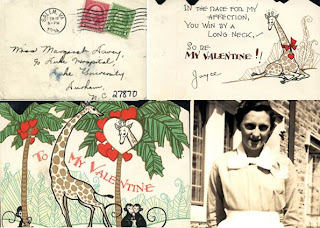 A mysterious love letter sent in 1934 was found in Durham, North Carolina (USA), 76 years after being posted in the mail from Salem, Virginia (USA).

Intact, the message of Margaret Davey was found by the chief operating officer of Duke University. Mike Trogdon was intrigued and went to the game of the recipient.

nside the envelope was a card designed with hearts, a giraffe and the message: “in the race for my love, you won by a long neck. So be my dear.” The end, the sender was identified as Joyce.

Searching in the archives of the university, found that Trogdon Margaret Davey graduated from nursing in 1935 and married a soldier from World War II.

When the director went to the home of Margaret, was told she died in January at age 96.

When displaying the message to the children of the nurse, another revelation: the sender was alive and was a distant niece of Margaret.

Joyce is 82 years old and was moved to revise its declaration of love for the aunt. “She was my favorite,” said the lady.