Skip to content
Loading...
Strange News
What Really Happened in The Benedito Miranda Abduction?
The Day over 10 Thousand people witnesses a UFO – The Morenão UFO Incident
The 18th Century Alien Abduction you didn’t know
The Jose Higgins Abduction Tentative 1947
The Truth About The Janiel’s Abduction
What Really Happened to the family in the Caiana UFO Abduction
What happened in the Duas Pontes Incident?
Bep-Kororoti The Celestial Master
The 1998 Capão Redondo UAP Incident
The Ubatuba Incident – A UFO Exploded in 1957 with Fragments?
BooksCryptozoologyParanormalReally? 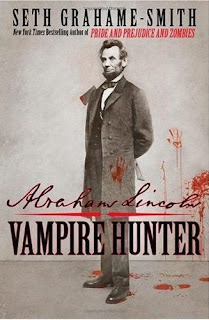 with a funny “book trailer” bellow.

Following the success of his bestselling Pride and Prejudice and Zombies

with another mélange of history and horror, Seth Grahame-Smith

inserts a grandiose and gratuitous struggle with vampires into Abraham Lincoln’s life. Lincoln learns at an early age that his mother was killed by a supernatural predator.

This provokes his bloody but curiously undocumented lifelong vendetta against vampires and their slave-owning allies.

The author’s decision to reduce slavery to a mere contrivance of the vampires is unfortunate bordering on repellent, but at least it does distract the reader from the central question of why the president never saw fit to inform the public of the supernatural menace.

Indiana, 1818. Moonlight falls through the dense woods that surround a one-room cabin, where a nine-year-old Abraham Lincoln kneels at his suffering mother’s bedside. She’s been stricken with something the old-timers call “Milk Sickness.”

“My baby boy…” she whispers before dying.

Only later will the grieving Abe learn that his mother’s fatal affliction was actually the work of a vampire.

When the truth becomes known to young Lincoln, he writes in his journal, “henceforth my life shall be one of rigorous study and devotion. I shall become a master of mind and body. And this mastery shall have but one purpose…” Gifted with his legendary height, strength, and skill with an ax, Abe sets out on a path of vengeance that will lead him all the way to the White House.

While Abraham Lincoln is widely lauded for saving a Union and freeing millions of slaves, his valiant fight against the forces of the undead has remained in the shadows for hundreds of years. That is, until Seth Grahame-Smith stumbled upon The Secret Journal of Abraham Lincoln, and became the first living person to lay eyes on it in more than 140 years.

Using the journal as his guide and writing in the grand biographical style of Doris Kearns Goodwin and David McCullough, Seth has reconstructed the true life story of our greatest president for the first time-all while revealing the hidden history behind the Civil War and uncovering the role vampires played in the birth, growth, and near-death of our nation.

is a film and television writer/producer, semi-frequent blogger, and bestselling author. His first novel, “Pride and Prejudice and Zombies,” debuted at #3 on the New York Times bestseller list. Since its release in April 2009, it has sold over a million copies and has been translated into 20 languages. Seth is also the Co-Creator/Executive Producer of the upcoming MTV comedy series, “The Hard Times of RJ Berger.” He lives in Los Angeles with his wife and son.