Skip to content
Loading...
Strange News
The Ubatuba Incident – A UFO Exploded in 1957 with Fragments?
Alien Abduction in 1956 Niterói
The Bauru Incident – Daildo de Oliveira Wrestling with Invaders
The Turíbio Pereira Incident – Another Closed Encounter in Lins
The Lins Incident – The Maria Cintra Close Encounter of the Fifth Kind
Captain Fortunato UFO Incident – What Were the Foo Fighters?
The Day Aliens Crashed a UFO Conference – The Dolores Barrios Incident
VASP Flight 169 Incident – A Close UFO Encounters of the Third Kind?
The 1846 Leverger Incident – UFO witness from the 19th Century
UFOs in Amazon – When Mythology may be the Answer
Really?Wild Life

Witnesses have described their horror at seeing a tourist being eaten by a “gigantic” shark in South Africa’s most popular holiday destination.

Lloyd Skinner was pulled under the surf and dragged out to sea by the shark, believed to be a great white, off Fish Hoek beach in Cape Town. His diving goggles and a dark patch of blood were all that remained in the water. 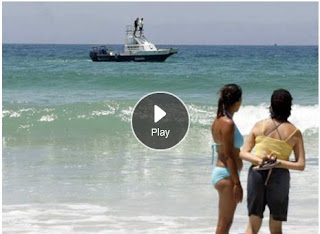 “Holy shit. We just saw a gigantic shark eat what looked like a person in front of our house,” witness Gregg Coppen posted on Twitter. “That shark was huge. Like dinosaur huge.”

The shocking attack yesterday afternoon came after an increase in recent shark sightings and led to calls for an electronic warning system to alert swimmers.

Skinner, 37, a Zimbabwean who lived in the Democratic Republic of Congo, was standing chest-deep 100 metres from the shore and adjusting his goggles when the shark struck. It was seen approaching him twice before he disappeared in a flurry of thrashing. Cape Town’s disaster management services had issued a warning hours earlier that sharks had been spotted in the water, but the shark flag was not flying.

Witnesses described the terrifying scene. The shark was “longer than a minibus”, Coppen told the Cape Times newspaper.

He said: “It was this giant shadow heading to something colourful. Then it sort of came out the water and took this colourful lump and went off with it. You could see its whole jaw wrap around the thing which turned out to be a person.”

British visitor Phyllis McCartain told the same paper: “We saw the shark come back twice. It had the man’s body in its mouth, and his arm was in the air. Then the sea was full of blood.”

Kyle Johnston said: “We were swimming only about 15 metres away from the guy. We were at about chest depth and he was a little deeper. We looked at the walkway and saw people waving towels at us, then we looked further out to sea and saw what looked like blood, and a man’s leg come up.”

His friend Dane Leo added: “I was floating and I thought the people waving at us were joking, but then I looked back and saw a fin and blood.”

Kathy Geldenhuys was sitting on a nearby bench. She recalled: “My husband had just pointed out how far the man was swimming from the other people. He asked what would happen if he was attacked by a shark, because he was so far away. The words were hardly cold when the shark attacked that man. The shark attacked twice; it turned and attacked the man again; I just saw the blood on the water.”

Geldenhuys added: “Only when it was attacking did I see the fin, but then I could see the whole body under the water. It was a very big shark … It came from below and grabbed the man. Part of his body was gone.”

Skinner was reportedly on holiday in Cape Town for the month to attend the wedding of his partner’s daughter. His partner was at the beach with him.

Four rescue boats and a helicopter searched in vain for Skinner yesterday and resumed the hunt today. Ian Klopper, a spokesman for the National Sea Rescue Institute, said: “You can rule out any chance of finding him alive. Whether we find body parts, it’s very unlikely. We think the shark took everything.”

Shark scientist Alison Kock said it was probably a great white, the most commonly spotted shark in the area. “More than 70% of recorded great white attacks on humans result in just the shark biting and then leaving,” she said. “There is that 30% where the shark behaves like it did in this case, where it came back and killed the person.” Kock added there had been an increase in shark sightings in recent weeks.

After a deadly attack at Fish Hoek six years ago, shark spotters were posted on mountain slopes to look for sharks close to popular swimming spots. The spotters use radios to order that a loud alarm be sounded so people can move to safety.

This attack has reportedly prompted discussions about introducing an electronic detection system. Klopper said he was unaware of details, but past speculation has included sonar buoys able to identify sharks and transmit a warning signal. Critics say this would be impractical.

Beaches along Cape Town’s False Bay coastline were closed today, but several bathers ignored the warning flags and ventured into shallow waters. Lifeguards asked them to get out and the shark alarm sounded several times.