Skip to content
Loading...
Strange News
Tiago Machado Incident – Everything You Need to Know About
The 1966 Ufonauts in Quipapa
1970 Avenida Niemeyer UFO Incident – A Strange Splashdown
UFO Lands in Itaperuna in 1971
Was Atlantis Finally Found?
Curitiba UFO Waves – Why So Many for Such longtime?
The 1947 Villa Santina Incident
What No One Tells You About the Alfredo’s Abduction in 1953
Do you know who is Captain Bee?
The Truth About What is the Betz Mystery Sphere?
Conspiracy 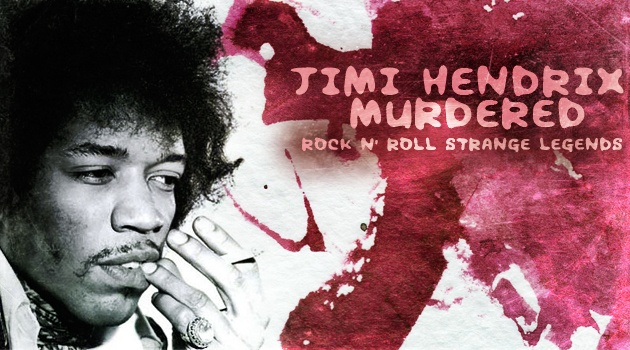 Was Jimi Hendrix murdered? That is what a lot of historians believe. In a recorded interview, to R. Gary Patterson, James ‘Tappy’ Wright talks about Jimmy Hendrix’s murder.

How Did Jimi Hendrix Die?

The collective knowledge is that he choked to death on his vomit.

However, how Hendrix passed away is still a matter of debate.

Here’s what you probably haven’t known.

On the days that followed that tragic September 18, 1970, no one interviewed the ambulance driver.

No one interviewed the doctor at the St. Mary Abbot’s Hospital in Kensington.

A lot of things they told us on biography book that happened that day, did not occur as written.

In the days before that morning, Hendrix overworked, with problems to sleep and reportedly had the flu.

He spent his relaxing time at the Samarkand Hotel flat with a girlfriend, Monika Danneman, a German painter and former ice skating champion.

According to Monika Danneman They had dinner and shared a bottle of red wine, then Jimi took a bath and Monika drove him to a party.

Monika returned around 3 am, blowing the horn and calling for Jimi, according to witnesses, it embarrassed him, and he got angry because “she wouldn’t leave me alone.” But he left with her.

With Jimi still struggling to fell sleep, he asked Monika for her sleeping medication.

Monika Danneman told authorities that she wouldn’t give them to Hendrix. However, she took one pill herself and went to bed at 6 am.

She then recorded waking up four hours later with Hendrix sleeping comfortably beside her.

Apon her return she noticed that Hendrix was unconscious but breathing.

Paramedics found the apartment door wide open the curtains closed and on Jimmi Hendrix in the apartment, Monika Dannemann vanished.

The autopsy concluded that Jimi choked on his vomit and died of asphyxia while intoxicated with sleeping pills.

Monika’s story to authorities presented to be inconsistent each time.

When you read the coroner’s report, it states that Hendrix had wine in his hair.

Besides that according to paramedic Reg Jones, Hendrix laid “covered in vomit,” and “his airway was completely blocked all the way down.”

On the toxicology report, the alcohol level in his bloodstream equivalated to two beers.

But paramedics identified wine was oozing out of Jimi’s mouth, which means his lungs were filled with wine.

The Doctor John Bannister that tried to save Hendrix at the hospital remembers that Jimi’s hair and shirt saturated with wine, but his lungs and stomach were absolutely full of wine.

“I have never seen so much wine.”

But Coroner only found a small amount of wine in Hendrix bloodstream and liver.

According to James ‘Tappy’ Wright, Monika Dannemann gave him the Vesparax sleeping pills.

As soon as he became unconscious, she opened the door to three men carrying bottles of wine. They basic waterboarded Hendrix with Wine.

They held him down and poured bottles of wine down his throat directly into the lungs.

The toxicological report corroborates this version. Hendrix had such a small amount of alcohol in his bloodstream, not enough to be oozing from his mouth.

It Implies that Hendrix was dead before the alcohol could enter the bloodstream.

Who ordered the Jimi Hendrix murder?

“well-done Darling, here is your money.”

A year later, Jeffery confessed to having murdered Hendrix to James ‘Tappy’ Wright.

According to James ‘Tappy’ Wright, Hendrix was killed because he was leaving Mike Jeffrey.

Mike Jeffrey borrowed one to Two million dollars from the mob to build Electric Lady Studios and altered paper of payments to Hendrix.

Hendrix voiced his unsatisfaction with Jeffrey, and if didn’t renew their contract Jeffrey would owe a great deal of money to the Mafia.

Aside from that Jimmy Hedrix had a two million dollar life insurance policy.

According to R. Gary Patterson, In the night Hendrix died, he, in reality, visited his longtime girlfriend, Devon Wilson.

Shortly after Hendrix’s funeral in Seattle, she went around saying Jeffery killed Hendrix.

Devon Wilson fell from the 8th floor of the Chelsea Hotel in New York on February 2, 1971.

On the 25th anniversary of Hendrix’s death, 1995, Monika Dannemann published “The Inner World of Jimi Hendrix” claiming she was engaged to Hendrix.

Police discovered the body dead in a fume-filled car, three days after losing a court battle to Kathy Etchingham, another of the rock star’s girlfriends.

Monika breached an undertaking that she would never repeat an allegation that Kathy was an “inveterate liar” concerning her relationship with Hendrix.

Who was Mike Jeffrey?

Frank Michael Jeffery a former MI6, Britsh Secret Service Agent, an explosives master and he used to terrify people with his claims.

Matter fact, in May 1969, on his way to Toronto, customer authorities found heroin and hashish inside a bag in Hendrix possession. He claimed a person gave to him.

Hendrix knew it was Mike Jeffrey. That Jeffrey placed the heroin there just to prove to Hendrix that he could get him anytime he wanted.

Until Mike Jeffrey and friends show up to save the day like in a movie shootout.

On the day of Jimi Hendrix’s death, Jeffrey was in Spain.

Jeffery died in a mid-air collision over Nantes, France on 5 March 1973.

All passenger died, the only thing the rescue team found from Mike Jeffrey was a wristwatch.