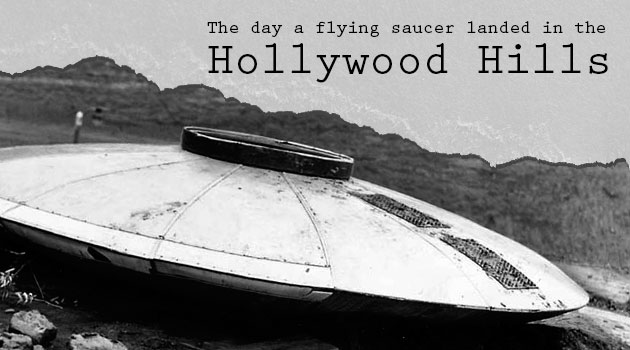 In January 1957 rumors of a real flying saucer landed in California, somewhere in the Hollywood Hills.

Thirteen years had passed from The Battle of Los Angeles.

Even just three years after U.S. President Eisenhower’s administration, allegedly, bypasses the US Constitution and signed the 1954 Greada Treaty, a form of pact with alien races.

This fact probably sparked the curiosity of Gloria Swanson, actress and a UFO believer and her friends.

But who was Gloria Swanson

By 1914 she began her association with the motion picture industry. She moved to California where she worked for Sennett/Keystone Studios before rising to stardom at Paramount in such Cecil B. DeMille features as Male and Female (1919) and The Affairs of Anatol (1921).

Gloria Swanson continued her long career with over fifty movies.

In 1938, Swanson relocated to New York City, where she began an inventions and patents company which occupied her during the years of World War II.

Among her subjects of interesting were the Unidentified Flying Objects phenomena.

In her archives, she had materials such audio cassette recordings, photographs, clippings, and publications as “Unidentified flying objects (UFOs), 1954-1968”, “The Latest Evidence on UFOs” by Dr. J. Allen Hynek, and “Are UFOs a Form of Psychic Phenomena?” by Dr. Jacques Vallee.

Together with a group of friends, Gloria Swanson trekked through mud and dark of night to an area off Lakeridge Road.

All in hope to find out if it was true what they heard that a spaceship had landed in the Hollywood Hills.

By the end of their hike, in a shallow crater, a twelve-foot diameter disk with a metallic-like surface.

Apparently, in its downward trajectory, the flying saucer knocked down a lamppost.

The group decided to document better their finding calling the Los Angeles Times.

The UFO that landed in Hollywood Hills is identified

During their examination of the flying saucer, Linze found out the lacking an engine and controls.

The mystery came to an end when the LA Times crew interviewed the surrounding neighbors.

They heard that the flying saucer was a prop discarded by producers after filming a documentary at the Hollywood Hills.

It was initially published on January 25, 1957, edition accompanying an article on the movie prop saucer.